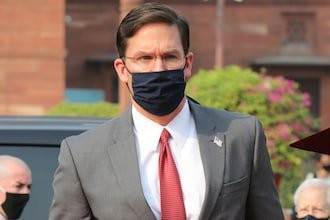 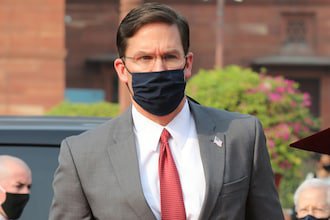 President Donald Trump has announced Christopher Miller as the new acting secretary of defense in the United States of America.

The US president announced the new appointment via his Twitter page on Monday, November 9. 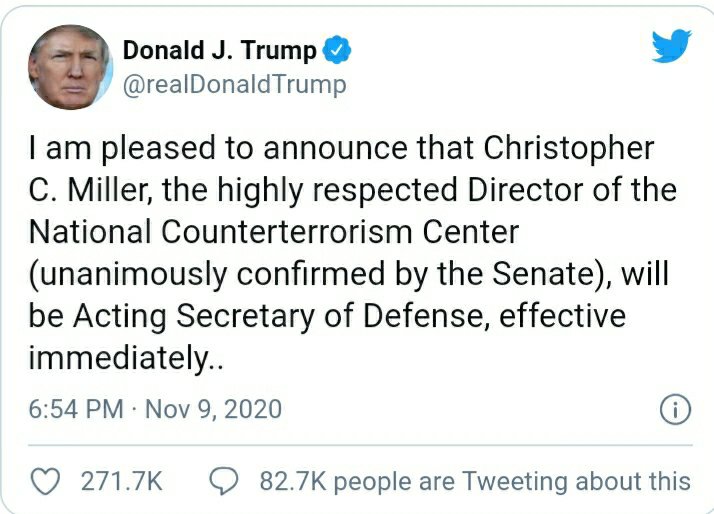 “I am pleased to announce that Christopher C. Miller, the highly respected Director of the National Counterterrorism Center (unanimously confirmed by the Senate), will be Acting Secretary of Defense, effective immediately.
“Chris will do a great job! Mark Esper has been terminated. I would like to thank him for his service.”

Some reports had earlier indicated that Esper had already prepared a resignation letter in anticipation of being ousted by Trump after the election.

Esper has had a rocky relationship with Trump after openly resisting the US president’s consideration of using active-duty troops to quell June riots.

NBC News reports that Esper drafted the letter but did not say when he intends to submit it.

The network reported that Esper is helping members of Congress draft legislation that will strip names of Confederate leaders from military bases and plans to work with Congress to put language in the annual National Defense Authorization Act so the name changes will be written into law.

Speculation about potential resignations of cabinet officials is a well-worn, D.C.-insider, post-election parlor game.”
Trump’s displeasure with Esper has been apparent for months.

CHECK IT OUT:  “I Told My Husband I Cheated On Him And He Wants A Divorce” – Woman Cries Out

Trump had said in reaction to the rumours of a cold relationship with Esper:

“I consider firing everybody. At some point — at some point, that’s what happens.”
In September, Trump took another apparent shot at Esper, who is a former executive at weapons manufacturer Raytheon.

“The top people in the Pentagon probably aren’t [happy] because they want to do nothing but fight wars so all of those wonderful companies that make the bombs and make the planes and make everything else stay happy.”