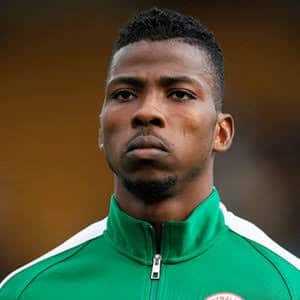 The Super Eagles will show the Leone Stars no mercy when the two teams meet later on Friday, Leicester City forward Kelechi Iheanacho has warned the poster boy of the Sierra Leone National Team, Kei Kamara.

Gernot Rohr’s men are a bunch of wounded Eagles after last week’s embarrassing draw at home to today’s opponents and are keen to rebuild their battered reputation.

The three-time African champions surrendered a four-goal lead in the first leg of their matchup against the world’s 120th-ranked team in a 2021 Africa Cup of Nations qualifier at the Samuel Ogbemudia Stadium.

Iheanacho was a 62nd-minute substitute for Ahmed Musa in that encounter. But he is in contention with the duo of Genk’s Paul Onuachu and Club Brugge’s Emmanuel Dennis for a starting shirt in Freetown after Napoli’s Victor Osimhen was ruled out due to injury.

Iheanacho and Kamara had a conversation during training at the National Stadium in Sierra Leone on Monday evening, and the Super Eagle informed the Minnesota United frontman that they mean business.

In a video circulating on social media and shared on Nwankwo Kanu’s official Twitter account, Iheanacho said in Pidgin English: “Una try but we no go mercy for una here. We vex come, we dey vex.”

Kamara replied: “This na Freetown, we don’t lose in Freetown, I tell you this now”.

Iheaancho responded: “Everything is free in Freetown”.

We vex come we no go mercy for you Star Boy @67Kelechi pic.twitter.com/g1PRry1VQJ

A Nigeria victory coupled with a positive result for the Benin Republic in Lesotho will see Nigeria qualify for Cameroon 2021 with two games to spare.