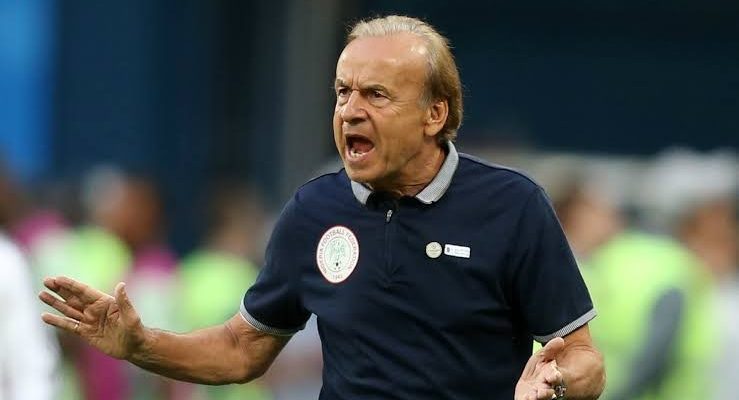 The Nigeria national football team managed only two points in two games against the world’s 120th-ranked side, and the competence of the team’s German tactician has been called to question

The Super Eagles Technical Adviser Gernot Rohr is under pressure and could see his contract terminated after Nigeria’s Minister for Sports and Youth Development expressed that the three-time African champions deserve a better and more competent head coach.

Rohr has been the coach of the Super Eagles since 2016, guiding the national team to the 2018 FIFA World Cup in Russia and a third-place finish at last year’s AFCON in Egypt.

The Super Eagles have not won a game since, losing to Algeria and drawing to Tunisia in two friendly ties last month.
But more disappointing has been Nigeria’s two draws against Sierra Leone over the past week.

The Gernot Rohr-tutored side surrendered a four-goal advantage to draw 4-4 with the Leone Stars in Benin City and could not salvage their battered reputation with another stalemate in Freetown.

Sports Minister Dare has, however, apologized for those two embarrassing displays and has pledged to do the needful to address the issue.

“The performance of the Super Eagles from their last two matches calls to question the suitability and competences of Technical Adviser, Rohr. Nigerian football deserves better. The needful will be done. Apologies to all football lovers,” the minister wrote on Twitter.

The performance of the Super Eagles from their last two matches calls to question the suitability and competences of Technical Adviser, Rohr. Nigerian football deserves better. The needful will be done. Apologies to all football lovers.

Nigeria stay on top of Group L with eight points, one better than the Benin Republic and five ahead of Sierra Leone.

CHECK IT OUT:  SEE THIEF!! Man In Custody For Allegedly Stealing 1,000 Litres Of Diesel

One win in any of their final two games will see Gernot Rohr’s men earn their spot at Cameroon 2021.