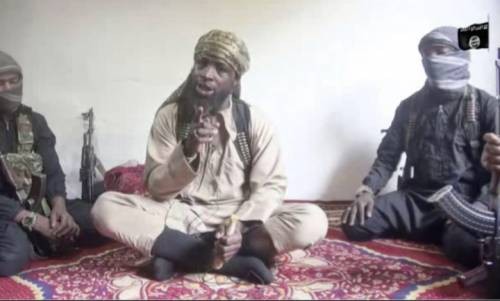 Abubakar Shekau, leader of Jama’atu Ahlissunnah Lidda’awati Wal Jihad otherwise known as Boko Haram, has claimed that he cannot be arrested because he was doing the work of God and ‘He will protect him’.

Shekau, who spoke in a 30-minute video seen by HumAngle in response to the Nigerian Army’s fresh manhunt for him, vowed that the war against the government would continue even after him.

In the video, the Boko Haram leader was shown sitting circled by two of his fighters holding guns in a less spacious room.

The Nigerian Army had on Wednesday, November 11, kicked off a fresh manhunt for Shekau and some of the top Boko Haram commanders.

A banner showing the pictures of Shekau, Abu Mus’ab Albarnawy, and Ibrahim Abu Maryam, who topped the most wanted list, was unveiled by Babagana Zulum, governor of Borno state, and Tukur Buratai, Chief of Army Staff.

In his new view, which features a question and answer session, Shekau vowed that the war would continue even after him.

“Arresting me will not stop the work we started. What confuses you is you think the religion is mine but it belongs to Allah,” he said.

He also spoke on the members of Boko Haram,.who recanted from the group and joined the amnesty program in the North-East. “They have left the fold of religion,” Shekau said of the ex-fighters.

CHECK IT OUT:  Buhari Hosts Ministers Who Served Under Him As Military Head Of State

He, however, said he and his men would never consider such a path in their lifetime, putting aside any chance of reconciliation between his group and the state.

Shekau mocked Nigerian military in the video, saying that they repeatedly told people that he was killed even though he was still alive.

He attributed economic hardship in Nigeria to God’s vengeance against the country for its war against Boko Haram and it’s members.