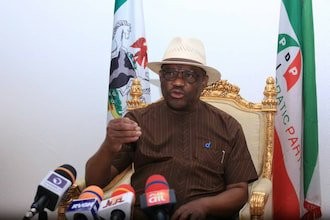 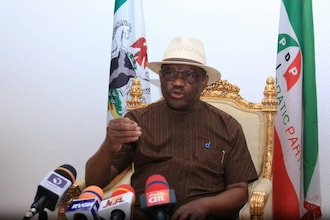 Nyesom Wike, the governor of Rivers state, has again hit hard at his counterpart from Ebonyi state, David Umahi, over his defection from the Peoples Democratic Party (PDP) to the ruling All Progressives Congress (APC).

The Nation reports that Wike said Umahi’s anger against the PDP started when Peter Obi was chosen as the presidential running mate to the party’s 2019 presidential candidate, Atiku Abubakar.

It was gathered that Wike, who spoke in a live television programme, also advised Umahi not to allow his quest to become president of Nigeria to destroy the political future of the southeast.

“When we had the 2018 convention that produced our presidential candidate then, the Waziri of Adamawa, Alhaji Atiku Abubakar, as presidential candidate, he consulted widely, and came up with Peter Obi, to be his vice, Umahi was livid because he wanted to produce or he wanted to be vice-president.
“You don’t choose who would be the vice-presidential candidate of anybody. Umahi was livid. What disturbs me, why do you think that if anything comes to southeast it must be you? Why do you think so?”
He also noted that while no one would deny Umahi the right to pursue his political aspiration, adding that he should be mindful of the political future of the southeastern region.

The governor said Umahi had shown himself as an ungrateful man for insisting that he left PDP to protest the injustice the party meted to the southeastern region since 1999.

Wike said Umahi could not talk of injustice when he singlehandedly installed his two younger brothers as the zonal vice-chairman of PDP and the deputy state chairman of the party.

“If he believes in equity and justice, will he be doing such? It is because he has planted these people that the state House of Assembly had such effrontery to give the National Working Committee (NWC) ultimatum to zone the presidency to the east. Where does such a thing happen? No other party has done any zoning. You can imagine the level of selfishness. ”
He also described as untrue the claim by Umahi that he made PDP in the southeast zone as the only financier of all of its activities.

He said such a claim suggested that other governors of Anambra, Abia, and Enugu states were not doing anything to ensure the success of the party in the zone.

“I know it’s not correct. If not for Pius Ayim that impressed it on former governor Elechi, would Umahi have become governor? So, he can’t say he’s the one who has built PDP.

“The party made him what he is and if he denies it, it only tells you the kind of person he is. What’s even his contribution at the national level of the party to support his claim? Where was he when people like Alex Ekwueme fought General Abacha and built the party? I distaste such arrogance.”