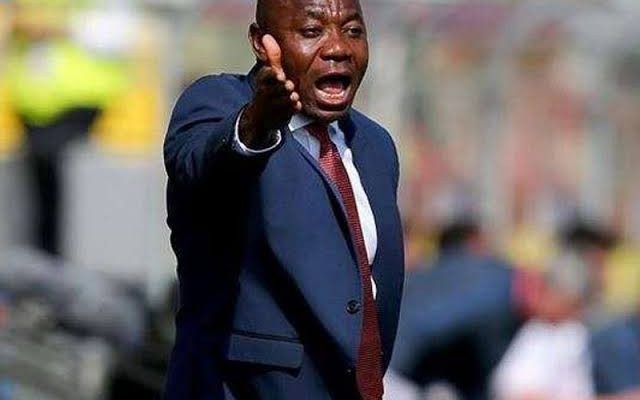 The former Tanzania head coach has his eyes on the lookout for coaching opportunities in Spain, and he is confident in his ability to manage in the European nation

Emmanuel Amuneke has admitted that his coaching style is influenced by some of the famous coaches he played under, including Bryan Robson, Jose Mourinho, and Luis Van Gaal.

Amuneke emerged through the ranks at Zamalek, under the guidance of David McKay, with the former Super Eagles winger helping the Egyptian side dominate the African scene.

For his brilliance, Amunike was named the 1994 African Footballer of the Year after lifting the CAF Champions League and the Egyptian Premier League with Zamalek the previous season.

The flying winger then secured a move to Portugal’s Sporting Lisbon, where he teamed up with former Manchester United number two man Carlos Queiroz.

Together, they lifted the Taça de Portugal before Amunike earned a dream move to Barcelona.

Englishman Robson and his assistant Mourinho held sway when Amunike arrived at the Camp Nou in 1996. The Nigerian played his part as the Catalans lifted the Copa del Rey in his maiden season.

When Louis Van Gaal arrived as Barca coach in 1997, injuries and loss of form kept Amunike out of the Dutchman’s plans, and he was sparingly used until the 1996 Olympic gold medalist departed the Camp Nou in the year 2000.

Amunike began his coaching career a few years after his retirement with incredible results.

The former Zamalek ace guided Nigeria’s Golden Eaglets to glory at the U-17 FIFA World Cup in 2015. He later helped Tanzania qualify for the 2019 AFCON tournament for the first time in decades.

When asked, in an interview with AS, which of his former bosses – Robson, Mourinho, or Van Gaal – has influenced him the most as a coach, the former Barcelona forward said:

CHECK IT OUT:  27 Year Old Shot To Death By Policeman At Lagos Night Club

“Everyone has influenced me, the ones you mentioned, although Van Gaal and I were never on the same line.

“And before that, David McKay, who trained me at El Zamalek and trusted me when I was very young.

“And Queiroz, with whom I agreed at the Sporting de Portugal and always bet on me. I have tried to learn from all of them and assimilate the best of each one of them.”

And when queried on which style he aims to perfect as his among that of Guardiola, Mourinho, Simeone, Zidane, Amunike responded:

“All are valid. The important thing is discipline, because without it, it is difficult, and knowing what to do when you have the ball and when not.

“It is very important that there is communication and that the coach’s message reaches the player,” he added.