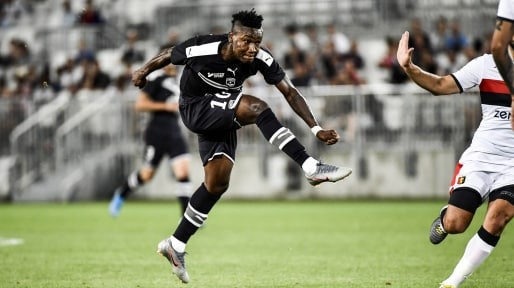 The 22-year-old was not involved in Nigeria’s Africa Cup of Nations qualifiers against Sierra Leone, but he was back in action for Les Girondins

Super Eagles star Samuel Kalu played an important role as Bordeaux secured their fourth league win of the season following a 1-0 victory over Rennes at the Roazhon Park on Friday night.

Kalu was not invited for the Super Eagles doubleheader Afcon qualifier against the Leone Stars due to an injury he picked up in last month’s international friendly against Algeria.

However, the former Gent winger featured for Bordeaux in their Ligue 1 clash against Rennes and he provided the assist for Hatem Ben Arfa’s winner.

The former Newcastle playmaker put Les Girondins ahead in the 37th minute following a brilliant ball from Kalu, who beat a host of defenders, before setting up Ben Arfa.

Despite Kalu’s assist, he was replaced by Remi Oudin on the hour mark. His international compatriot, Josh Maja, also featured in the game, leading the line for Bordeaux for an hour.

The win lifts Bordeaux to 11th on the Ligue 1 table with 15 points from eleven games.

CHECK IT OUT:  King Sunny Ade Celebrates His 74th Birthday