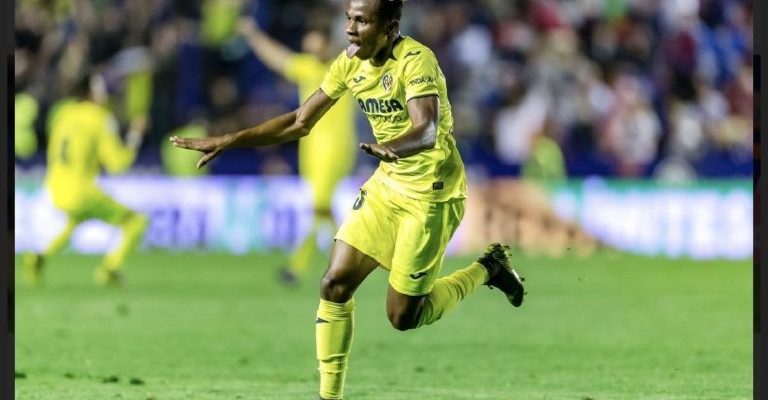 Samuel Chukwueze came off the bench to help Villarreal earn a point against Real Madrid in the Spanish top-flight encounter between the two sides.

Chukwueze was introduced on the hour mark, and he made an impact 15 minutes from time, earning a penalty which was converted by Gerard Moreno.

Moreno’s penalty ensured Villarreal took a point after Mariano Diaz had put Real Madrid ahead inside the opening two minutes.

In England, Semi Ajayi featured for West Brom against Manchester United, but the Baggies are still searching for their first league win of the season following another 1-0 loss.

A Bruno Fernandes penalty in the 56th minute was enough to earn United their first win of the season. Meanwhile in the Championship, John Mikel Obi featured for the whole 90 minutes as Stoke City secured a 4-3 win over Huddersfield United.

Carel Eiting put Huddersfield ahead in the 24th minute but a Tyrese Campbell quick-fire brace in the 31st and 33rd minute turned the tie around for Stoke City.

However, Isaac Mbenza levelled matters for the away side five minutes before the break. The Potters retook the lead on the stroke of half-time before Sam Clucas extended the advantage in the 57th minute.

Naby Sarr pulled one back for Huddersfield on the hour mark, but Stoke held on for a vital victory.

In Italy, Simy Nwankwo could not add to his tally as Crotone suffered a 2-0 home loss against Lazio on Saturday afternoon.

Simy, who has scored five league goals this season, played for the entire duration on a rain-soaked Stadio Ezio Scida. Goals from Ciro Immobile and Joaquin Correa gave Lazio the maximum points.

In the Bundesliga, Kevin Akpoguma once again featured in the heart of the defence as Hoffenheim played out a thrilling 3-3 draw against VFB Stuttgart.

Christoph Baumgartner put Hoffenheim ahead in the 16th minute, but Stuttgart responded immediately through a Nicolas Gonzalez strike in the 18th minute.

Silas Wamangituka Fundu then put Stuttgart ahead in the 27th minute before goals from Ryan Sessegnon and Andrej Kramaric (penalty) turned the tie around for Hoffenheim.

However, there was more drama as Marc-Oliver Kempf popped up in added time to earn a point for the away side.

In other leagues, Emmanuel Dennis was an unused substitute as Club Brugge secured a 1-0 victory over Kortrijk.

Noa Lang’s 60th-minute strike was enough for the Belgian champions to seal the three points. Dennis compatriot, David Okereke was introduced for the goalscorer in the 78th minute.