“The Boys Are Coming” – Maduka Okoye Wary Of Competition For Super Eagles Number One Gloves - NaijaCover.Com
Skip to content 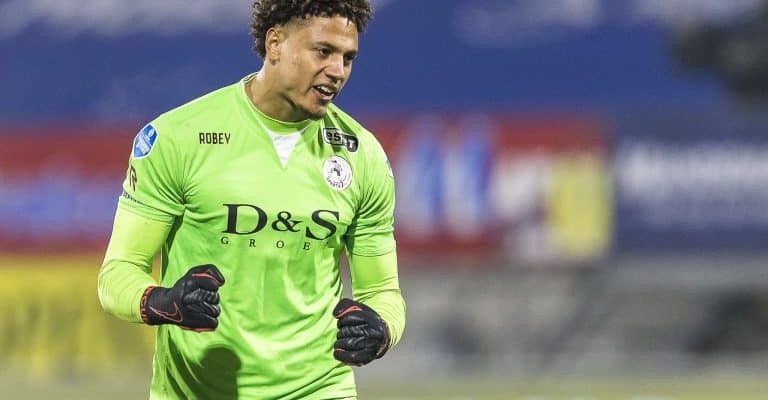 The young Sparta Rotterdam shot-stopper has seen circumstances thrust him up as Nigeria’s first-choice goalkeeper in the past few games, and he is keen to keep it that way

Maduka Okoye says he is aware that quality oppositions are vying with him for the Super Eagles’ number one goalkeeping spot, but he wants to prove he is good enough to remain the team’s first-choice goalie.

With Francis Uzoho gradually getting back to competitive form after a long term layoff, and the duo of Daniel Akpeyi and Ikechukwu Okoye inactive due to the break in the South African and Nigerian league, the coast was clear for Okoye to stake his claim for the number one jersey in October.

And the former Fortuna Dusseldorf trainee did well enough in friendly games against Algeria and Tunisia in Austria to retain the gloves during back-to-back Afcon qualifying matches versus Sierra Leone earlier in November.

Okoye came under bashing for conceding four goals in the first leg of that fixture in Benin City, but the youngster redeemed his reputation by keeping a clean sheet in the return leg in Freetown.

Super Eagles chief coach Gernot Rohr continues to keep his goalkeeping options open by handing fresh invitations to the Europe-based trio of Dele Alampasu, Matthew Yakubu, and Sebastian Osigwe all within the past two months.

But Okoye is confident that if he maintains his top form for club and country, he will stay ahead of the long queue.

“I have been with the Eagles for almost one and a half years now, and the first year, I was just on the bench,” Okoye told Sparta Rotterdam’s YouTube page.

Then I came in against Brazil, and that was the first step in this direction. Of course, it was not easy to get the No.1 spot, and it would be hard enough to keep it because the boys are coming, and I have to keep up the good work here at the clubside and also in Nigeria.

“I have to give big thanks to Gernot Rohr because he gave me the trust in the beginning, and now I have to pay him back with good works and good performance.”

Okoye has risen to become Sparta Rotterdam’s first-choice goalie this term and has excelled in the three matches he has featured for the Dutch side so far.