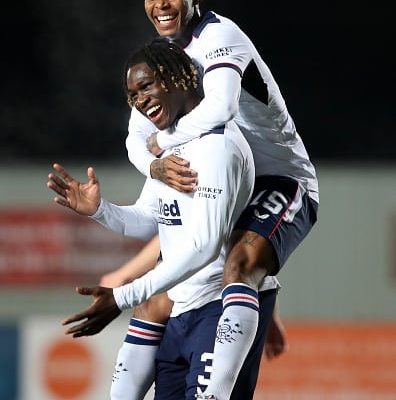 The Gers are yet to taste defeat in any domestic competition this term, and their Nigeria-eligible youngster helped them make light work of their opponents on Sunday evening

Defender Bassey Ughelumba got his first-ever Rangers goal as the Scottish giants hammered lowly Falkirk 4-0 in League Cup, despite missing the services of the talismanic Joe Aribo.

Aribo, one of Rangers’ most outstanding stars so far this season, was allowed some rest and left out of the matchday squad against the League One side.

At the same time, compatriot Leon Balogun watched from the bench on a bright evening at the Falkirk Community Stadium.

Still, the Gers had no trouble dealing with their hosts, with England-born defender Bassey Ughelumba doubling the visitors’ advantage on the half-hour mark.

Veteran striker Jermain Defoe had opened the scoring for Steven Gerrard’s side with six minutes on the clock.

It was 3-0 just before halftime when Borna Barišić’s sublime free-kick nestled into the back of the net.

A comfortable evening got even better after the break as it took skipper James Tavernier just six second-half minutes to get in on the goalscoring act, a rampant Rangers side running rings around Lee Miller’s side.

There were to be no further goals, though, as Steven Gerrard’s men returned to winning ways after their exciting 2-2 draw with Benfica in the Europa League on Thursday.

Next up for the Scottish Premiership table-toppers is a clash with Standard Liège at the Ibrox, where a win will see the Gers qualify for the knockout phase with a game to spare.

CHECK IT OUT:  Atiku Reacts Over ‘Killing & Secret Burial Of 1000 Nigerian Soldiers’