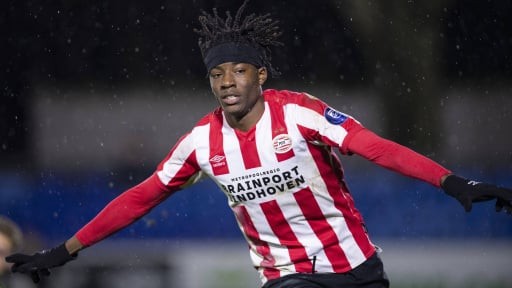 The youngster was born in England, but he is also eligible to represent the three-time African champions through his parents

Noni Madueke has revealed he is opened to representing Nigeria at the international level despite being born in England.

Madueke has caught the eye of many this season following his brilliant start to life in the Dutch Eredivisie. The 18-year-old has scored four times and registered three assists in 10 league games for PSV this season.

The former Tottenham youth player also has one goal and two assists in the Europa League this season. His impressive performances have brought him into public consciousness with his international future now a subject of debate.

Madueke was born in England and has represented the Three Lions at Youth Level. However, he also qualifies to play for the Super Eagles through his parents, and he could consider switching allegiance to the fourth ranked African nation.

When asked about his international future, Madueke told The Sun: “I am only 18 so I have got to be open to everything. If I had a closed mindset I would not be where I am now so for sure I am open to both.

“We just have to see in the future what is best.”

Should he decide to switch allegiance, Madueke will join the likes of Alex Iwobi, Ola Aina and Joe Aribo in the list of players, who chose Nigeria ahead of England.