U-20 Qualifiers: Frustrating Start For The Flying Eagles - NaijaCover.Com
Skip to content 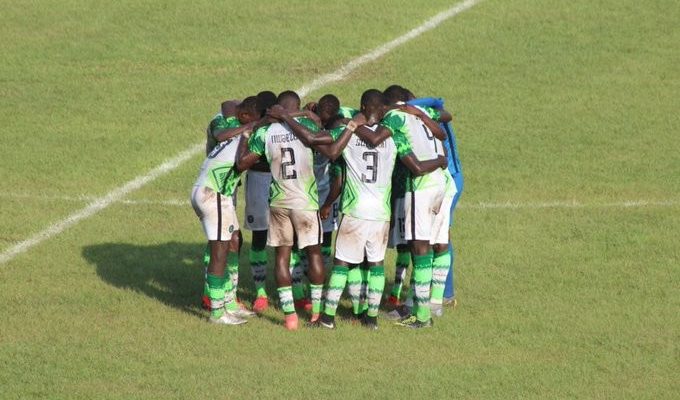 Nigeria’s U-20 football team kicked off their U-20 Africa Cup of Nations Qualifiers on Sunday, but it was an unconvincing start from Ladan Bosso’s boys

The Flying Eagles played out a 1-1 draw against Cote d’Ivoire in the opening game of their AFCON U-20 WAFU B qualifiers.

The game, which was played in Port Novo, started at a slow pace, but it was Nigeria that created the better chances, however, both Peter Olawale and Chris Nwaeze could not hit the target.

But after a goalless first-half, the Flying Eagles took the lead in the 61st minute through Nwaeze, who headed home a freekick from Wisdom Ubani.

Nigeria had the chance to double their advantage eight minutes later after Ubani was put through on goal, but he fluffed his lines.

It was a miss the Flying Eagle would rue as they had Nwaeze sent off moments later. Although Nigeria held on for most parts, the Ivorians found the breakthrough in the added minute of normal time to break the Flying Eagles hearts.

CHECK IT OUT:  OMG! Police Arrests Woman For Stabbing Her Husband To Death (See The Shocking Reason)