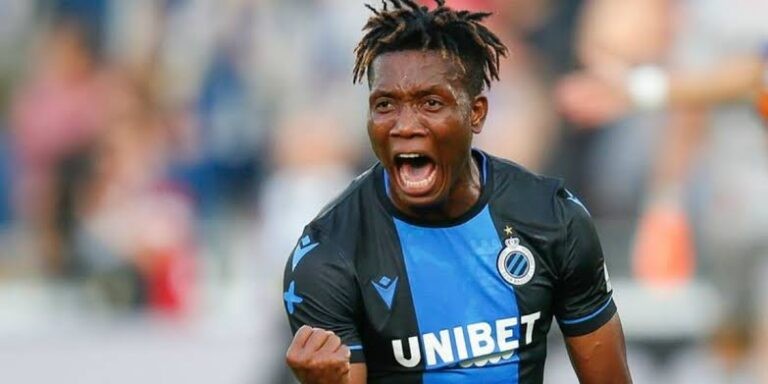 The Belgian champions have never made it to the knockout stage of Europe’s premier club competition, but their Nigerian import is backing the ambitious club to pull a shocking result on Tuesday evening

Nigerian forward David Okereke believes Club Brugge can write a few pages inside the history books when the Blue-Blacks face Serie A side Lazio in the UEFA Champions League matchday six clash.

Club Brugge head towards their final group game on Tuesday, needing an outright win over their hosts to secure passage beyond the group stages of the competition.

Brugge currently sit third with seven points in Group F, two points behind second-placed Lazio, while Borussia Dortmund are top of the log with 10 points.

Brugge are often fearless on their travels and have lost just two of their last seven away matches in the Champions League group stage – their exciting 2-2 draw with Real Madrid last season quickly jumping to mind.

There is more at stake, though, at the Stadio Olympico, where a win will see Brugge qualify for the knockout rounds for the first time in the club’s history.

Okereke believes coach Phillipe Clement’s side have what it takes to stun their Italian hosts and rewrite the history books.

“We have nothing to lose there (at Lazio),” he told the club’s website.

“We will go there with full energy. We can write a nice story.”

Okereke has struggled for form and starting shirt since completing a club-record move to the Belgian giants.

But the former Nigerian youth international scored the winning goal when Brugge defeated St. Truiden in the Belgian league on Saturday, and he hopes he can kick on from there for the club.

CHECK IT OUT:  Niniola’s Dream Comes Through As Femi Kuti Features In Her Upcoming Album

“I feel good, and I enjoy the matches. Football is not table tennis; it is a sport with 11 players. Club Brugge are a good team. I’m patient, and I take my chances when I can. I also adapt myself as a player. If the coach asks me to play in a certain position, I just do that.”

Okereke had his footballing education in Italy, where he spent roughly three years before Club Brugge snapped him up for a club-record fee of eight million euros.