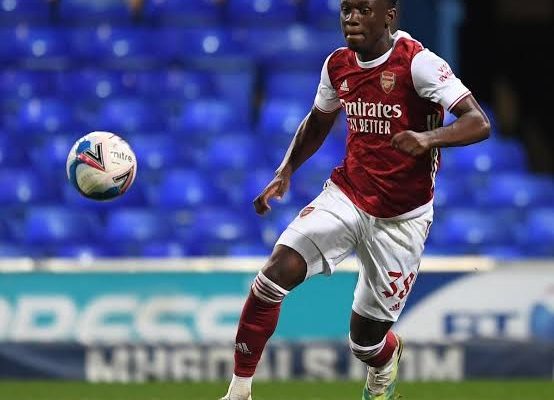 Youngster Folarin Balogun needed only 26 minutes on the pitch to provide an assist and score his fourth goal for the club as Arsenal defeated Dundalk 4-2 in Ireland on Europa League matchday six.

The 19-year-old striker of Nigerian descent is quickly showing he is the next big deal out of the Gunners’ famed academy, and Thursday night was another opportunity to show off his predatory skills.

Arsenal were leading 2-1 at the Aviva Stadium in Dublin thanks to goals from Eddie Nketiah and Mohamed Elneny when Balogun was introduced in the 62nd minute for the first goalscorer.

The youngster provided the assist for Joe Willock’s goal five minutes after coming off the bench and then scored with a cool finish in the 80th minute to round off the Gunners’ win – their sixth from as many games in the group stage campaign.

Balogun has contributed five goals (three goals, two assists) in nine Premier League 2 games, scored once in two EFL Trophy games, got his second Europa League goal in four games with that Dundalk strike, and continues to show at every turn that he may be Arsenal’s new Ian Wright.

CHECK IT OUT:  Fake Soldier, Robber Of Corps Member Arrested In Lagos