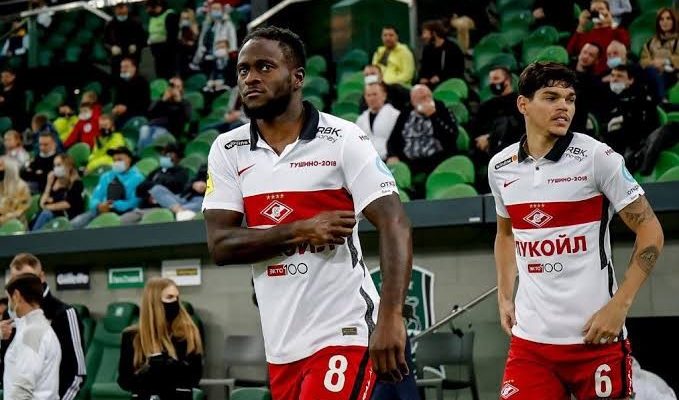 Ex-Super Eagles star Victor Moses was on from start to finish, but the Nigerian’s best efforts could not prevent Spartak Moscow from falling 1-0 at Sochi on Saturday afternoon.

35-year-old Ecuadorian midfielder Christian Noboa Tello got the only goal of the game for the hosts at the Olimpiyskiy Stadion Fisht ten minutes into the second half.

Moses, on-loan from Chelsea, has now logged 583 minutes spread across eight games for Spartak, but he continues to search for his second goal in the Russian top-flight.

The 30-year-old wing-back’s only league goal for the Russian giants arrived in the club’s 3-1 defeat of Krasnodar back in October.

Meanwhile in France, Super Falcons goalkeeper Chiamaka Nnadozie made her fourth appearance of the season to help Paris FC return to winning ways with an excellent 3-2 win at home to Dijon also on Saturday.

The 20-year-old shot-stopper had been on the bench in Paris’ last three league games, including the club’s 4-1 loss at PSG and the 0-1 home defeat to Bordeaux, games where Brazil’s Natascha Honegger kept goal for the club.

But Nnadozie, who last featured in Paris’ 4-1 victory over Stade de Reims, returned to the starting lineup as an Evelyne Viens double, and a Clara Mateo strike helped Sandrine Soubeyrand’s ladies outscore Dijon at the Stade Robert Bobin in Bondoufle.

Paris, with the win, now boast 15 points from 11 matches and sit in sixth on the Feminine Division 1 table.

CHECK IT OUT:  Gowon Speaks On Nigeria Still Marginalizing Igbos