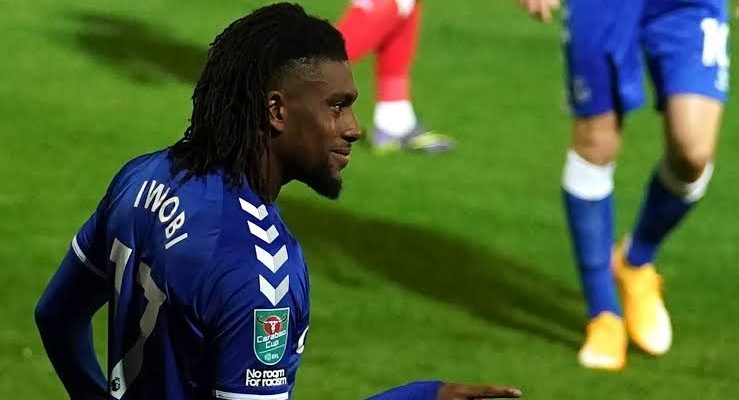 The Nigerian midfielder has been deployed in a wing-back role by his club boss in recent weeks, and the veteran coach sees nothing wrong in the tactical switch

Former Golden Eaglets coach John Obuh has thrown his weight in support of Super Eagles star Alex Iwobi who is doing his best to help Everton in a wing-back position despite being a more attack-minded player.

Everton manager Carlo Ancelotti has had to deal with injuries to regular fullbacks Seamus Coleman and Lucas Digne, and one of the solutions he came up with is playing three at the back while deploying Nigerian midfielder Iwobi as a right wing-back.

A multi-million euro signing from Arsenal mainly because of his playmaking ability, Iwobi has delivered impressive performances in his new role.

The 24-year-old, who struggled for playing time earlier in the season, played every single minute of the Toffees 3-2 win at Fulham and the 1-1 draw at Burnley last week.

Obuh, who guided the Nigeria U-17 national team to a runner-up spot at the 2009 FIFA cadet World Cup on home soil, is impressed with how Iwobi has applied himself to his boss’ demands.

And the 60-year-old coach has likened the situation to Iwobi’s uncle Jay-Jay Okocha and former international teammate Victor Moses both incredibly talented stars who played not just a role in the midfield.

“Did Okocha just play one position throughout his career? Once you see situations like this, you must accept it in good fate because it depends on the coach who has now found out that he can do it and he did it in the games,” Obuh told Goal.

“He is doing it for the team does not mean that is his permanent position, it depends on the formation and the tactical ability that he will present as regards to what the coach wants.

CHECK IT OUT:  Giant Of Africa! Burna Boy Gets Custom Beats By Dre Headphones (Photos)

“If you remember, sometimes ago, Moses also did that at Chelsea when Conte was there, and it is always very good once you see a player who can switch positions just because of the demand of the team’s tactics.

“I’m sure he must have done it for quite sometimes before he was presented in a match. He really did his best, and I was very happy with him.”

Iwobi is likely to continue in his wing-back position when Everton host Frank Lampard’s Chelsea at Goodison Park on Saturday.

The Toffees currently sit ninth on the English Premier League table with 17 points, six places and five points behind their next guests.