A Rare Sight Of A Family Fully Behind Their Girl Child Football Career - NaijaCover.Com
Skip to content 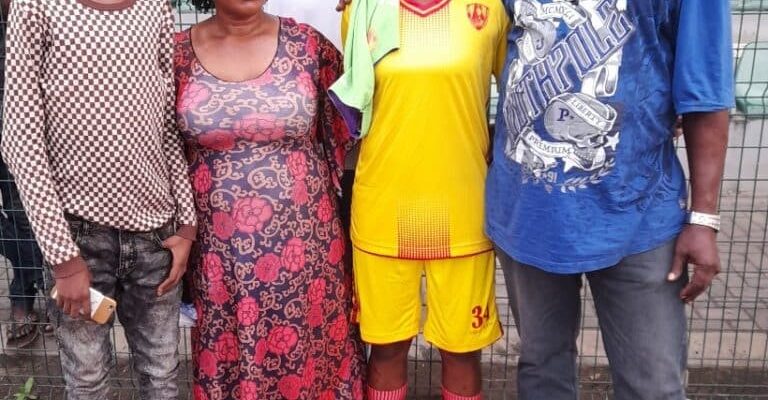 Growing up as a kid in Nigeria, football is the last profession your parent would want for you- especially not for a girl.

For most Nigerian parents, education is the number one thing for their kids- right from the nursery to the university level.

Their dream is for their kids to become engineers, medical doctors, lawyers but not footballers. I remember the first jersey I bought- a Pavel Nedved Juventus jersey- was seized by my mother just because I would not stop playing football.

Not that you can blame Nigerian parents, though, the way administrators run football from the grassroots level to the top does not give parents enough confidence that their kids can make a career out of football.

However, despite the low possibility of reaching the top as a footballer in Nigeria, that has not stopped the parents of Esther Inyang from supporting their child’s career.

Esther Inyang was part of the Edo Queens squad that defeated Dream Stars at Agege Stadium in the matchday two of the Nigeria Women Football League.

Esther grew up in Lagos and picked interest in football at a very young age before deciding to play professionally.

The clash against Dream Stars was the first time her parents and siblings got to see her as a professional after leaving her family in Lagos to sign for Edo Queens.

CHECK IT OUT:  “God’s got you dear” – Toyin Lawani reaches out to Ella after she was ‘disgraced’ at the BBNaija Reunion

It was a moment that excited Esther’s family, particularly her mother, who could not hide her happiness at seeing her daughter play as a professional for the first time.

“It’s awesome, it’s great, we are happy to view her today for the first time since she left us, we were told yesterday that here in Lagos and we should come and watch her, Esther’s mother told Soccernet.

And that’s why we are happy to come and watch her.

While a lot of players have found it difficult to make it to the top, Esther’s mother says through God’s grace and mercy, her daughter’s case will be different.

Photo: Esther with her parents.

“And we pray for God’s grace, mercy to be upon her that she will make it and she will make well because that has been her desire right from childhood.”

So I pray God should lift her higher above their enemies and her to be competent with her mates.

Their decision to support their daughter’s football career is a rare occurrence in Nigeria, but that could be down to the fact they both had football experiences.

According to Esther’s father, he once played football with the Police team, and it was a thing of joy for him when her daughter told him she also wants to play.

“Well, I was so excited, Esther father said when asked about his reaction after her daughter decided to take football as a career.

Personally, myself, I play. I played football. I played for the police machine team. So I was excited that I have one player in my family.

So I did not have any doubt in my mind. I knew she would make it.

Meanwhile, her mum said she encouraged Esther to play because her Junior sister, who is a police officer, is also a footballer.

Photo: Esther, her parents and siblings.

“Well, I encouraged her because in my family, even my junior sister that is a police is playing.”

My junior brother is playing. So it is from the blood, and I pray God should encourage her so that she would go higher and above expectation.

Now that she’s now fully a professional, both parents expressed hope that she would go on to represent not just the Super Falcons but the best clubs in the world.

“In fact, that has been our dream (Falcons),” Esther’s mother said when asked what her wishes for her daughter are.

“She’ll go higher than Falcons in Jesus name. That has been our desire, so God will help her, Esther’s mother concluded.”