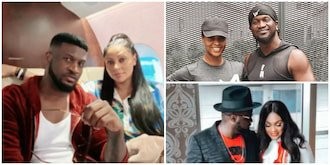 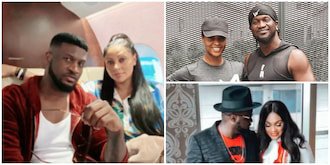 The grudge between the Okoye families did not stop the wives of Jude and Paul from reaching out to Lola Omotayo, wife of Peter, following the loss of her father who died during the early hours of Wednesday, December 17.

Lola had taken to her official page on Instagram with a lengthy post in which she announced the passing of her beloved father and how his death comes as a major blow to their family.

Many celebrities, fans and colleagues were spotted in the comment section and the other two Okoye wives also dropped comments under the post.

Ify, wife of Jude prayed for the lord to strengthen Lola and her family members in what she described as a difficult time.

“So sorry for your loss.. May God strengthen you and your family in this difficult time it is well.”

Similarly, Anita, wife of Paul, expressed shock at the news and prayed for the family of the bereaved. She wrote:

“Oh no ! I’m speechless! I’m so sorry for your loss…this is a huge blow and my prayers are with you and your family.”

It remains unknown if both ladies have personally reached out to the family or if their husbands, Paul and Jude, have also sent condolence messages.

The post Jude and Paul Okoye’s wives commiserate with Lola Omotayo-Okoye over loss of father appeared first on .

CHECK IT OUT:  BBNAIJA:- “I Am A Virgin And I May Not Have Sex Till Marriage” – Diane Reveals