See What Lewandowski Said About Ronaldo And Messi As He Reveals His Favourite Player - NaijaCover.Com
Skip to content 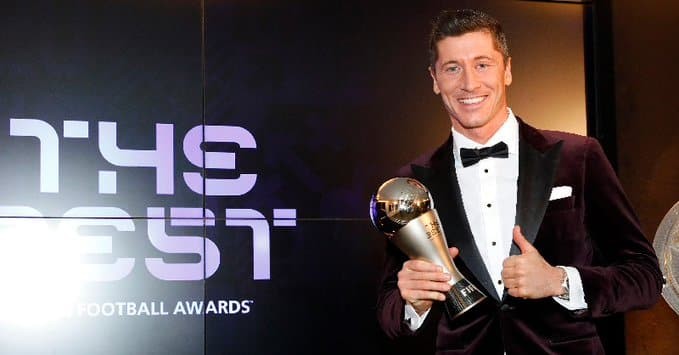 The Poland striker beat the two heavyweights to win this year’s FIFA Best Men’s Player award, which was held virtually on Thursday night

Robert Lewandowski has revealed it’s an honour to be competing with Cristiano Ronaldo and Lionel Messi after beating the two greats to the FIFA best men’s player of the year award.

Ronaldo and Messi have dominated the individual awards for over ten years with the two having 11 Ballon d’Ors and three FIFA best awards between them.

The two have always been in the top three since 2007 except for 2010 when Xavi Hernandez and Andres Iniesta were nominated alongside Messi.

This year was no different as Ronaldo and Messi once again made the top three shortlist along with Lewandowski.

However, unlike in past years, neither ended up with the top prize as Lewandowski was crowned the winner following an incredible year which saw him won five trophies with Bayern, including the Champions League and Bundesliga.

Speaking after winning the award, Lewandowski said it’s a dream come true for him while also praising the consistency of Ronaldo and Messi.

“This really is something – Messi and Ronaldo have been playing at the highest level for years, and now I’m rubbing shoulders with them, Lewandowski told FIFA website.

“This means that all the hard work has paid off. I wouldn’t have achieved this without the team – they’re the ones who create the situations for me. It’ll take a while to absorb what I’ve achieved, and I think I’ll struggle to get to sleep tonight.

CHECK IT OUT:  MAD JAM!!! Wizkid Cooking Something In The Studio With Teni … You Ready?

“As a young player, I always used to watch Ronaldo and Romario – they were the big names. Brazil always had great strikers, and I learned a lot from watching them.”

“I always used to follow whoever was wearing the yellow No.9, 10 or 11 jersey. I’d tell my 16-year-old self that you can always play well, regardless of where you’re from,” he added.