“He ignored me” – Madrina (Cynthia Morgan) reveals why he unfollowing Davido on Instagram - NaijaCover.Com
Skip to content 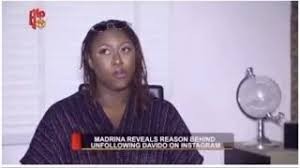 Cynthia Morgan has revealed that Davido didn’t pick her calls after telling her to call him.

Recall that after Cynthia Morgan accused his former boss, Jude okoye of destroying her music career and taking all she had from her.

Her heartbreaking story attracted Davido, one of the prominent artists in the country and he took pity on her and offered to help her retrace her step not minding he once had an issue with the female singer.

Although Davido equally recalled that Cynthia Morgan once called him a ‘fuck boy’; meanwhile, he stated that he would not stop him from rendering the needed help to the artist.

Well, Cynthia Morgan has now revealed in a new interview that Davido did not reply her messages neither did he pick her calls after he made the promise.

CHECK IT OUT:  BBNAIJA!! Describe BBNaija 2020 Housemate, Dorathy In One Word (SEE PHOTOS)