Friends Mourn As Corper Is Shot Dead After Orientation In Osun (Pix) - NaijaCover.Com
Skip to content 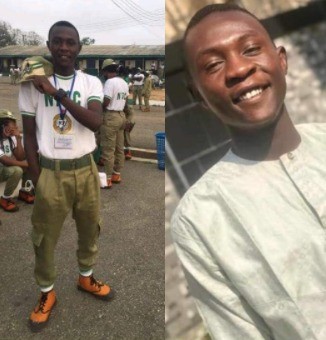 Posted By Udokabestluv On December 24th, 2020

Loading...
The management of the National Youth Service Corps (NYSC) has confirmed the death of one of its members, Igbere TV reports.

The NYSC, however, debunked a report that 16 members of the scheme were abducted.

In a statement issued on its official Twitter handle on Wednesday, the NYSC said an attack did happen and was carried out by armed robbers against 17 corps members who just completed the orientation programme in Osun State and were heading to the north.

“The true position is that, indeed, 17 corps members that completed the 2020 Batch “B” Stream 1B Orientation programme at the NYSC Permanent Orientation Camp, Ede, Osun State, on Tuesday, December 22, 2020, boarded vehicles heading towards the northern part of the country,” the statement said.

“Tragically, along Jere-Abuja Expressway, they were accosted by a gang of armed robbers whose sporadic gunshots unfortunately felled corps member Bomoi Suleiman Yusuf.

“It is imperative to state that the 16 other corps members were never abducted.”

Commiserating with the family of the deceased, the NYSC said “the death of any corps member is a big loss, not just to his family, but to the scheme and the entire nation at large.”