What Joe Aribo Said After Starring In Rangers Victory - NaijaCover.Com
Skip to content 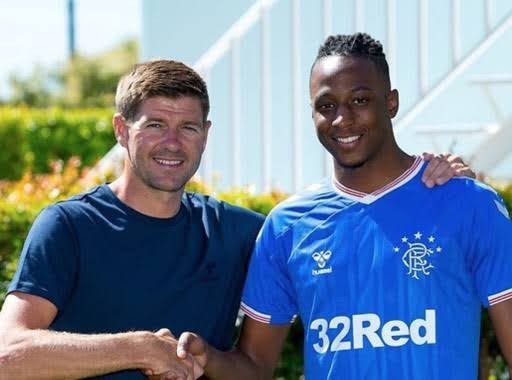 The Nigeria international was one of the Gers’ most outstanding stars at the Ibrox Stadium on Saturday afternoon, and he has opened up on why the team was left pleased with their performance against Hibernian

Rangers midfielder Joe Aribo admits it was not easy picking up the victory against Hibernian on home ground, but he confirms he is celebrating the win with his teammates.

Steven Gerrard’s side made it 12 league wins in a row after Ianis Hagi’s first-half finish – off a move started by Aribo – handed the Gers a 1-0 victory over the Hibees.

Aribo was not the only Super Eagles star on parade for the hosts, with former Mainz defender Leon Balogun impressive all afternoon.

Balogun even came close to scoring his first Rangers goal with a first-half effort cleared by Paul McGinn with goalkeeper Dillon Barnes beaten.

The ex-Wigan man also had a second-half effort saved and defended resolutely when under pressure as the visitors chased an equalizer in the closing stages.

Aribo, though, delivered another man of the match display in the middle of the park, showing remarkable close control and dribbling skills throughout.

The Nigerian midfielder, who looks to be getting back towards his best after injury and illness, maintains Rangers needed all the three points badly against Jack Ross’ side.

“I am buzzing, and the boys are buzzing too. We needed to get that result today, and we needed to put in a good performance,” Aribo said [Rangers TV].

“We stayed solid together, we were under the cosh a little bit, but we did what we had to do.

CHECK IT OUT:  Serie A: Simy Shines But Crotone’s Struggles Continue

“No two games are the same, and we just need to go out there in every single game and have the right mindset and just push through.

“We knew we had to be patient on the ball and make five, six, seven passes and try to break through them, and that is what we managed to do, and we got the goal through that.”

With the latest win, Rangers have now kept 16 clean sheets and conceded just five goals, their best returns after 20 league games in history.

The Gers’ perfect run of 12 straight wins is also the club’s best run since 2008, helping them maintain their 16-point lead at the top of the Scottish Premiership.

Focus will now turn to the clash with St. Mirren on December 30 as the Gers continue to brush everyone aside in the league.