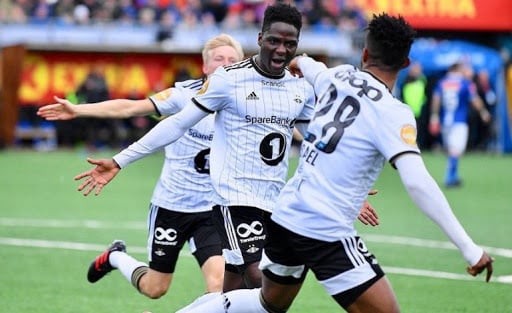 Nigeria’s Babajide David Akintola scored one and provided the assist to one of the four goals smashed in by Gabon’s Aaron Boupendza as Hatayspor secured a massive 6-0 win away to Antalyaspor on Tuesday.

All of Boupendza’s goals and Akintola’s strike arrived in the game’s opening half as coach Murat Sönmez’s side took a five-goal advantage into the break.

Mirkan Aydın’s effort in stoppage time sealed the win for the visitors; their third away win of the Super Lig campaign.

Akintola, on loan from Danish side Midtjylland, has been particularly impressive for Hatayspor, with the 24-year-old winger netting three goals and supplying one assist in eleven matches for the Star of the South.

The former FC Ebeide starlet got his first goal for Hatayspor in the 1-1 draw to Sivasspor back in November and grabbed his second earlier in December when his team smashed three goals past BB Erzurumspor, before his latest effort at the Antalya Stadyumu.

Akintola also has one goal in two Turkish Cup matches – finding the back of the net as Hatayspor drew 2-2 at home to Karacabey Belediyespor, before crashing out of the competition on penalties.

Tuesday afternoon’s massive victory helps Hatayspor tighten their grip on the sixth position on the league table ahead of their home clash against Konyaspor on Friday.

CHECK IT OUT:  Tacha Reveals Osama Bin Laden, Jesus, Adolf Hitler And Others Inspired Her