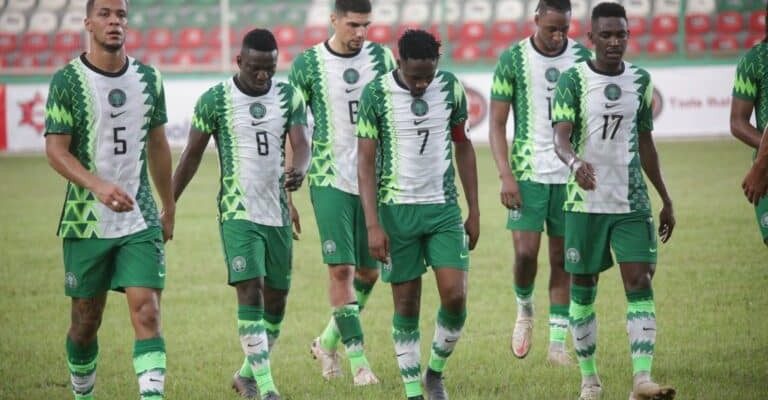 Nigeria have some of the most passionate fans in world football, but the Everton midfielder found out the hard way almost two months ago

The Super Eagles surrendered a four-goal lead to draw 4-4 with lowly Sierra Leone during an Afcon-qualifying clash in November, a result, Alex Iwobi admits, a lot of the national team’s supporters took badly.

Iwobi scored twice on the day, as Gernot Rohr’s men ran riot in the opening half-hour against a team 80 places below them on the FIFA ranking.

But even the former Arsenal forward was not spared the wrath and criticisms that came raining down on the team from far and near after the Leone Stars managed to complete a stunning comeback in the second half.

Iwobi confessed that even the players and the President of the Nigeria Football Federation, Amaju Pinnick, were not pleased about that disappointing result.

But the Super Eagles fans delivered the ugliest reaction of all, with the players only narrowly escaping physical injury on their way out of the Samuel Ogbemudia Stadium in Benin City.

“I can’t even tell you what happened in the game, I don’t know, it was mad,” Iwobi told Everton FC.

“There was a lot of heated discussion in the changing room.

“The Nigerian Football President came in and said a few words.

“Trying to go back to the hotel, people were throwing stones at our bus.

“One cracked a window and hit a player. It was crazy.

“They are proper passionate.

“I see where they were coming from, the result was hurtful.

CHECK IT OUT:  Ahmed Musa and his wife, Julie, welcome a baby boy

“But we were almost physically hurt because of it!”

Iwobi insists that unfortunate reaction is not often the case as Nigerian fans treat the Super Eagles stars like kings after every decent performance.

The Everton star hopes the current generation of players can lead the three-time African champions to glory at a major tournament to give the fans something to cheer.

“Of course, I like the passion and we want the fans to show it,” Iwobi added.

“Only Lord knows how they’d react if we could win a tournament.

“It is what everyone dreams of and, hopefully, we can make it a reality.”

Nigeria are all but assured of their place in the 2022 Afcon finals with the Gernot Rohr-led side needing one point from their last two group games to book their ticket to the next edition of the Championship in Cameroon.