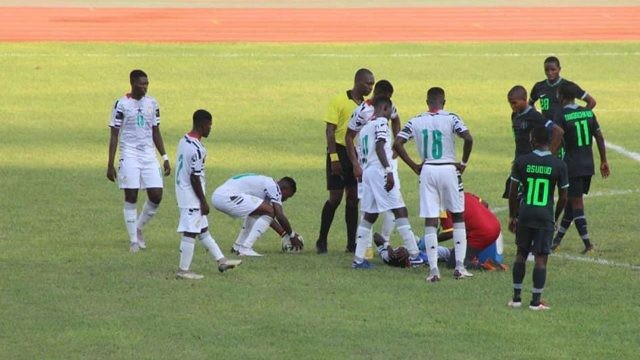 Former Super Eagles goalkeeper Ike Shorunmu has not ruled out the chances of the Golden Eaglets making it past the group stages of the West African Football Union B U-17 Tournament.

Five-time world champions, Golden Eaglets, are on the brink of elimination after being held 1-1 by Ghana at the Stade Municipal, Lome, at the weekend.

The Eaglets had lost their opening game 1-0 to Ivory Coast on Wednesday to set up the crucial tie against the Black Starlets.

Ghana next meet Ivory Coast in the last group match with anything but an Ivorian victory seeing Nigeria knocked out of the competition.

But Shorunmu retains the belief that the young Nigerian boys may still advance through an event that serves as qualifiers for the 2021 U-17 AFCON.

“Eaglets still have the chance to pick the continental ticket if Cote d’Ivoire beat Ghana,” Shorunmu told the Guardian.

“Writing off the team at this point is not good. This is football, and anything can happen. But I want to plead with football-loving Nigerians not to blame the Eaglets and their coaches for the team’s performance in Togo.”

Shorunmu highlighted inadequate planning, poor preparations, and the absence of grassroots developmental programmes as the primary reasons for Nigeria’s poor performance at the regional tournament.

“Other countries that are serious maintain their dominance in football and are striving hard to remain at the top,” the former Nigerian international added.

“For Nigeria that has been the best in age group competitions in Africa and at the world level, there is no basic structure put in place to discover players and work with them to develop.

CHECK IT OUT:  Nigerian Billionaire Ned Nwoko Speaks On Secret Marriage To Regina Daniels (Read What He Said)

“In other climes, academies and youth leagues are organised to pick upcoming stars and groom them to stardom.

“Nigeria is currently in a situation where the dominance of the cadet teams has been hijacked by other African countries.

“Structures need to be put in place as quickly as possible to return the country to its top rating in age group competitions.”

The Eaglets will be hoping Ghana loses to Ivory Coast by more than one goal in their last group game to have any hope of making it to the semi-final.

Only the competition winners and first runners-up will qualify for the U-17 AFCON in Morocco later in the year.