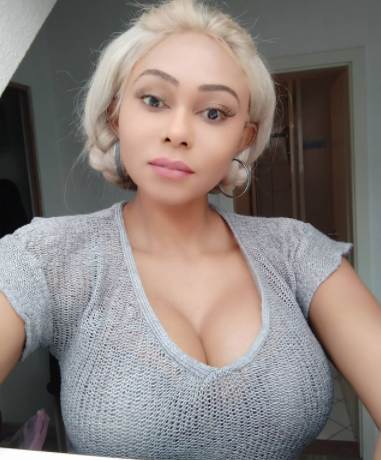 Popular Nigerian Transsexual, Miss Sahhara, has asked Nigerians to stop tagging her on the pages of petty feuding Nigerian crossdressers.

Sahhara’s warning came as Bobrisky and James Brown have been going after each other on social media since Friday, January 15.

In a post shared on Instagram, Miss Sahhara said no one has the monopoly of who can or can’t be a transwoman or a crossdresser in Nigeria. She warned that if the ”little trans girls” in Nigeria don’t stop fighting, she will be forced to start exposing them and their tricks.

I HAVE HAD IT WITH ALL YOUR ANNOYING AS*ES:
This is for Nigerians who can’t differentiate between a crossdresser and a transexual woman!

The picture you are looking at is what some women look like, yes! SOME WOMEN! I know my privilege.

Since trans women are women, there is no difference between a trans woman and a cisgenender woman(‘cisgenender’ is a person who’s identity corresponds with the gender they were assigned at birth).
Don’t start with your #DoYouBleedBullshit

Even though my life history is of a transexual woman, it doesn’t define or limit my womanhood.
_
A crossdresser is someone who loosely bends their identity by wearing clothings that doesn’t conform to the stringent gender norms imposed by patriarchy.

Crossdressers/transvestites are interchangeable, and are mostly focused on fashion/physical expressions.They don’t live their lives 24/7 or use medicines to enhance their gender.They can revert back to their assigned gender identities when they want.

Transexual people, crossdressers, transvestites are all under the same umbrella terminology called TRANSGENDER!

CHECK IT OUT:  Ike And Mercy Compared Comically To Travis Scott And Kylie Jenner

NO ONE HOLDS THE MONOPOLY ON WHO CAN OR CAN’T BE TRANS! NO ONE SHOULD BE THE GATEKEEPER/ ‘GENDER POLICE’ BY TELLING OTHERS THEY ARE NOT VALID!
__
That said, I beg you all, to stop tagging me on pages of petty feuding Nigerian crossdressers about who is ‘The Nigerian Queen’Are these banshees really that stupid to fight over that title? HELLO!!..
There’s space for all trans people in Nigeria to coexist.

When one of you is successful, we all gain from the visibility. But recently, that visibility has become increasingly negative.

As amusing & entertaining as their lives maybe, these b*tchiness & catfights are not doing the Nigerian LGBT community any good.
Doing & saying crazy/stupid things in media to remain relevant is undermining the progress/ inclusion we are fighting for.

WARNING: IF ALL YOU LITTLE NIGERIAN TRANS GIRLS DON’T RING YOUR NECKS IN, I MAY BE FORCED TO START EXPOSING ALL YOUR STUPID TRICKS & LIES BY PUBLICLY DEBUNKING ALL YOUR CLAIMS ON MY PAGE!
___
STOP THIS STUPID DRAMA BY PAINTING OUR COMMUNITY BADLY! Now go back to twerking your padded b*tts! #MotherHasSpoken”