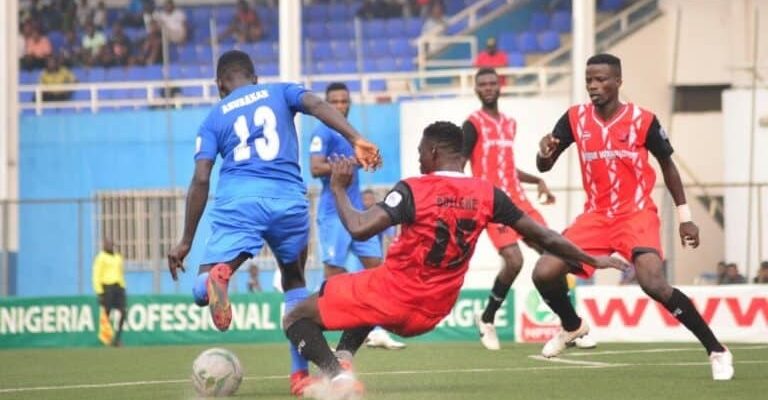 First-half strikes from Anayo Iwuala and Gabriel Orok was all Enyimba International FC needed to earn a pleasing 2-1 win over Kano Pillars on matchday 5 of the Nigeria Professional Football League 2020-21 season.

Iwuala got Fatai Osho’s men going with a fine strike in the 21st minute, and Orok added a second ten minutes before the break as the hosts blew Maisu Gida away in the opening half.

The visitors found the bearing after the break and had opportunities to reduce the deficit, but their finishing let them down.

But the equalizer never materialized as Enyimba held on for their third win of the campaign.

In Lafia, Nasarawa maintained their unbeaten start to the NPFL season with a narrow 1-0 victory over Katsina United.

Chigozie Uzochukwu got the winner for the home side shortly after the interval to secure a third league victory for victory Solid Miners.

Rivers United tightened their grip at the top of the league table with a commanding 3-1 triumph over struggling Heartland FC at the Adokiye Amiesimaka Stadium in Port Harcourt.

Godwin Aguda’s 18th-minute penalty set the tone of the afternoon before Kazie Enyinanya doubled the homers’ advantage past the hour-mark.

CHECK IT OUT:  Buhari, Abubakar, Ajimobi, Yahaya Bello Jet Out Of Nigeria For Jordan (See Reasons)

No away win was recorded on a day when Jigawa Golden Stars’ stalemate versus Kwara United was the only clash that failed to produce at least a goal.