WAFU B Final: Ivory Coast Too Strong For Nigeria - NaijaCover.Com
Skip to content 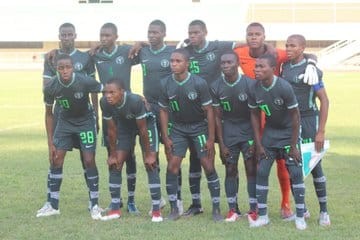 The Golden Eaglets were hoping to end their tournament on a high, but the Baby Elephants showed their class to emerge as Champions of the WAFU B Africa Cup of Nations qualifying tournament

Nigeria’s U-17 team received a football lesson as Ivory Coast outclassed them in the final of the WAFU B Afcon competition in Togo.

The Fatai Amoo led team had suffered a 1-0 loss to the same team in the group stage but went into Monday’s clash with newfound confidence after beating tournament favourites Burkina Faso in the Semi-finals.

However, it was the Ivorians that showed their superiority once again as they edged out the five-time world champions 3-2.

Ivory Coast started on the front foot and they took the lead in the opening quarter courtesy of a finish from Sindou following a corner kick.

The baby Elephants continued to dominate possession and should have had a second in the 32nd minute but were denied by Destiny in Nigeria’s goal.

Ivory Coast went into the break with the one-goal lead, but they doubled their advantage just a minute before the hour mark courtesy of a strike from Abdrumane Konate.

Seydou Traore, a second-half substitute, then scored the Ivorians third in the 84th minute to put the game out of Nigeria’s reach.

There was a late drama, though, as Ahmed Abdullahi scored twice for the Golden Eaglets in the added minute of normal time to set up a nervy finish.

However, the Ivorians held on for the win. Both Ivory Coast and Nigeria have now qualified for the Africa U-17 Championships set to hold in Morocco in March.