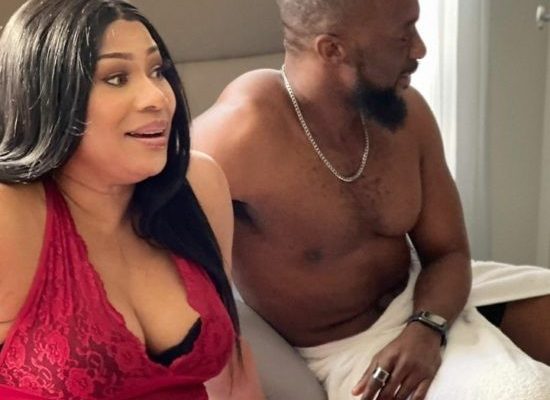 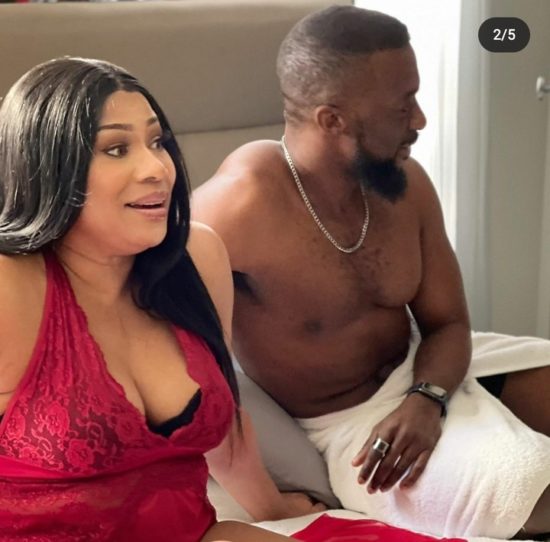 Nollywood actress Regina Askia has revealed she will be playing the role of Olivia, wife to Desmond who will be played by actor Ramsey Nouah in the project titled WEB.

The 53-year-old, who now practises as a nurse in the USA, shared a picture of herself looking regal in an Instagram post on Thursday.

She said it was her last day on set and also sent love to the cast and crew members.

“And so, I wrap up on the set of WEB today as OLIVIA, a wife DESMOND will not forget in a hurry.

“Much love to cast and crew and all the talented young men and women who made it happen,” she wrote.

“Okay!! Back to the grind! Thank you cast and crew of WEB, my friends old and new, lovely reunion and much needed change of scene for me.

“Thank you for being Covid protocol compliant, the Covid police on set, It was such a pleasure. May God bless the work of our hands and keep us all in his care, Amen.”

Sharing her experience working on the project, she wrote;

“Hey Fam!! Gather around!! Come in here y’all and let me spill the tea on a sex scene I had to play in a recent movie WEB, I’m talking about “surf board abs” and “womb shifting tings”

“Now I did do Nollywood years back and sure we had those scenes but we would hide behind shoulder shots and fake kiss.

“Fast forward to 20 years later, honey it’s a whole ‘nother’ story. So there I ( my character) was with my toy boy who first dropped his towel to show what he had come to work with. The nurse in me took a good look but I had to tuck the nurse in and let the actress me react romantically to what I saw.

“Camera was still rolling when my toy boy with the sexy bedroom eyes crawled like a big cat to prey, landing with some serious humping.

“I hid my face, turned to the side, squirmed, CUT!! Director shouted . Aunty! It has to be convincing. It shows you are trying to get away! In my mind – haba, is this boy trying to shift my womb from the outside, wahala wa o!

“Take 2 – The kid approached again with the bucking and humping, and this time he added the choke. Whhhaattt!! My eyes popped, I was so shocked- shhooo! Na so today children dey do? CUT!!! Aunty, Do you want us to change the scene

“Take 3!! Damn! I was not delivering. Worried! This was getting close to rated! Should I be here? Professional considerations and public personae presentation? Should have thought of those before hand but who knew Mr Muscles would be prowling on my bed like this. What do I draw on? I texted my husband.

“Deep breath! I closed my eyes and prepped for onslaught! It came fast and furious. This boy sef! His own was no longer just acting o because I felt some turgidity, Complete with sound effect, growling, grunting, slapping and flexing. All the strategic positioning to hide back fat rolls and belly fat, Sugar baby scattered all and left my wig shaky. In my mind “chaii, I don die”

“Omg!! I so badly wanted to choke Ramsey myself…sebi that’s another take now! When Ramsey, Director and my sexy eye sugar baby exchanged looks and slight nods, I knew it was on.” 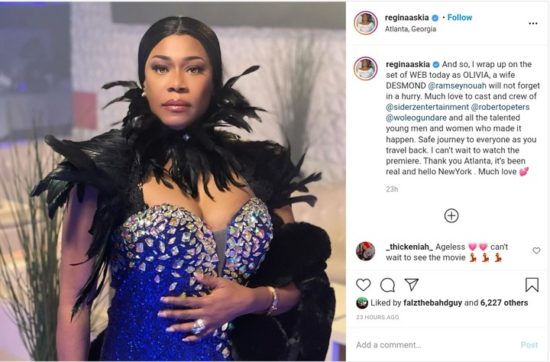 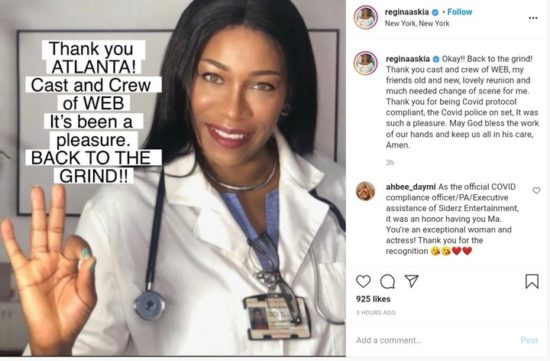 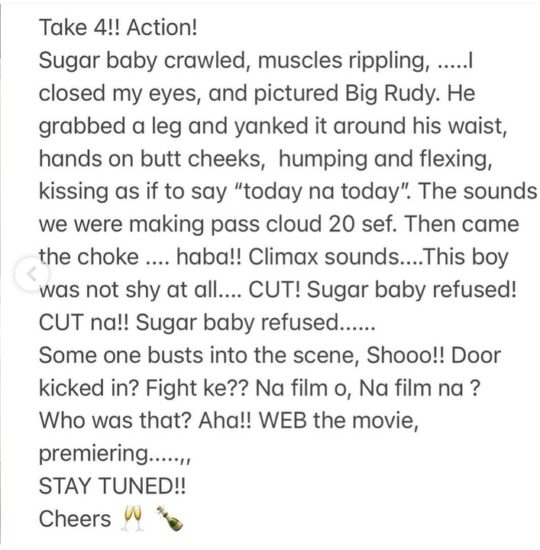 Regina revealed she was going to be working on this project on January 16.

CHECK IT OUT:  Gov. Makinde Begins Probe Of Ajimobi’s Contracts

She said, “Here we go again with the cameras rolling!! Set of WEB!! Stay tuned.”

The news got a lot of fans happy including media personality Denrele Edun.