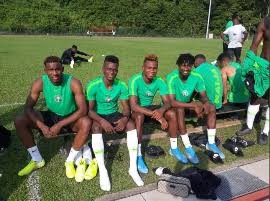 With just over a week left in the winter transfer window, things are gearing up for one of the Nigerian stars in Spain to switch clubs

La Liga sides Elche and Granada have kicked off negotiations to effect the transfer of Super Eagles midfielder Ramon Azeez from the latter to the former club, as per El Gol Digital.

The 28-year-old last week asked Granada to let him leave the club he joined in January 2019 to move to a side where he would be guaranteed more playing time.

Azeez has only featured in two La Liga games after 19 match days for the Rojiblancos, totaling 100 minutes. The former Lugo ace has also played two matches in the Copa del Rey, but more is needed for the Nigerian to boost his national team chances.

Granada have given Azeez, who has a contract with the club until June 2022, the green light to leave, with manager Diego Martinez confirming the club’s stance recently.

Segunda Division side Real Zaragoza are among the first sides to show interest in the former Flying Eagles captain, but Elche presently hold the ace.

Azeez prefers to continue his adventure in the Spanish top-flight with the struggling Los Franjiverdes.

Elche would hope the addition of the Nigerian central midfielder would aid their objective of avoiding relegation come the end of the season.

CHECK IT OUT:  Do You Agree? Buhari Administration Has Failed In Education – ASUU