Dennis Delight On Bundesliga Debut; Oshoala Too Hot To Handle In Spain - NaijaCover.Com
Skip to content 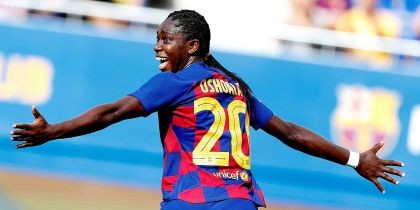 Super Eagles attacker Emmanuel Dennis began a new chapter in his career on a promising note as he helped Cologne to a delightful 3-1 win over Arminia Bielefeld in a game-week 19 Bundesliga clash at the RheinEnergie Stadion.

Cologne boss Markus Gisdol handed the Nigerian forward his first start, just days after moving in from Belgium, and the tactician was rewarded with a fine attacking display that has become a rare sight in the Billy Goats’ games this term.

A Marius Wolfe double in the opening half-hour and an Elvis Rexhbecaj effort shortly after the hour mark was all Cologne needed to secure all the three points at stake.

It was the first time the Billy Goats would score three times in the Bundesliga this term.

Dennis was replaced in the 82nd minute by Jan Thielmann, ten minutes after Cordova got the visitors’ consolation goal.

The 23-year-old will hope his performances in the coming days impress his German bosses before the expiration of his loan spell later in June.

In Spain, Super Falcons star Asisat Oshoala was back to her deadly best as she found her target twice to inspire Barcelona to an exciting 4-1 home victory over ten-woman Real Madrid.

The visitors had goalkeeper Maria Rodriguez sent off in the 72nd minute, by which time Oshoala and co. had done all the damage inside the Estadi Johan Cruyff.

CHECK IT OUT:  EndSARS: You can’t face unarmed civilians with guns in a democracy, Atiku declares

Oshoala ensured Barcelona went into the break with a three-goal lead, profiting off a Christine Hansen pass in the 37th minute after Alexia Putella and Jenni Hermoso had scored for the hosts.

The reigning African Women Player of the Year then added a fourth goal – her 13th strike of another prolific league campaign – in the 70th minute.

Rodriguez then received her marching orders shortly after before Olga Carmona struck from the penalty spot to give Real Madrid something to cheer about on a sad day.