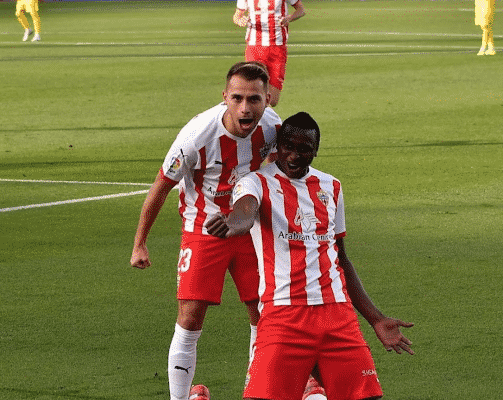 Former U-23 star, Umar Sadiq scored his 11th league goal of the season as Almeria continued their promotion push to the Spanish top-flight with a 3-1 win over Castellon.

Sadiq has been vital to La Union’s promotion and title chase in La Liga’s Smartbank and was again impressive on Saturday.

The 23-year-old put Alemria’s ahead again in the 78th minute after Jose Corpas opener in the 26th minute was cancelled by Ruben Diez. Jorge Cuenca ten minutes from time ensured it was a comfortable victory for Almeria.

It was Sadiq’s 11th league goal in 20 games this campaign. Sadiq also has two goals in two Copa Del Rey games this season.

Meanwhile, in Belgium, Paul Onuachu fired blanks as Genk played out a barren draw at KV Mechelen. Onuachu, who scored twice in the midweek to take his tally for the season to 22, was on the pitch for the entire duration but was well marshalled by the Mechelen’s defence.

In Germany, Taiwo Awoniyi was also unable to find the back of the net as Union Berlin played out a 1-1 draw against Borussia Monchengladbach.

Awoniyi was on the pitch for 79 minutes before coming off for Joel Pohjanpalo. Robin Knoche put the hosts ahead in the 31st minute, but Alassane Plea’s strike a minute before the hour mark ensured both teams shared the spoils.

In England, there was no winner in the battle of the Nigerians as West Brom played out a 2-2 draw against Fulham at the Hawthorns, while Alex Iwobi was on the receiving end as Newcastle stunned Everton at Goodison Park.

CHECK IT OUT:  ‘Pepe Must Fight To Start At Arsenal’- Arsene Wenger

Finally, Daniel Akpeyi was in goal, but he could not help Kaizer Chiefs avoid a defeat against Orlando Pirates in the first act of this season’s Soweto Derby.