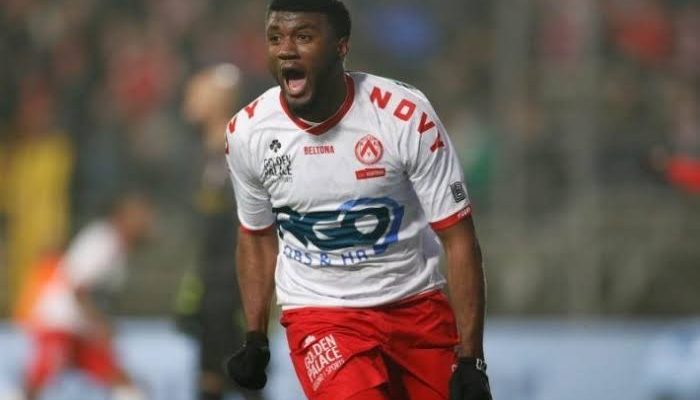 The Lorient star announced himself to a global audience at the weekend, and he appears set to achieve big things

The 24-year-old striker, who regards van Persie as the best finisher he ever saw, admits that his playstyle is often, undeservedly, compared to that of Inter Milan strong man Romelu Lukaku.

In an interview with Ouest-France, Moffi said: “I grew up watching Jay-Jay Okocha, Obafemi Martins, Nwankwo Kanu, then Victor Osimhen play. I watch him play a lot, we played together, he’s a role model.

“Otherwise, I am very often compared to Romelu Lukaku, but I am far from his level! Otherwise, I love Didier Drogba, especially when he was playing for Chelsea.

“I am also a big fan of Robin Van Persie. He was the best, for me.”

Osimhen took the Ligue 1 by storm last term after arriving from Belgium’s Sporting Charleroi before departing for Napoli in the summer in a record transfer deal.

Moffi, who also arrived from Belgium’s Kortrijk, has been sensational in the French top-flight, scoring in each of his last five matches for lowly Lorient.

And the young forward has his gaze set on securing a big-money move to a top side in the nearest future.

Moffi added: “Like any footballer, I dream of playing in top clubs. At the moment, I am focused on Lorient.”

CHECK IT OUT:  Ogun Government Ready To Improve Ease Of Doing Business

Having started his career in the less-fancied Lithuanian league, Moffi has come a long way in just three years.

The biggest highlight of his career, however, came at the weekend when he scored a late winner in Lorient’s defeat of champions PSG.

And Moffi hopes his performances would attract the attention of Super Eagles head coach Gernot Rohr and earn him a dream international call-up.

“I haven’t heard from the coach,” the former Kortrijk ace said.

“But if the opportunity arises, I would be extremely happy to represent my country.”

Moffi moved to Lorient in the summer for €8 million, and the striker already boasts six league goals.