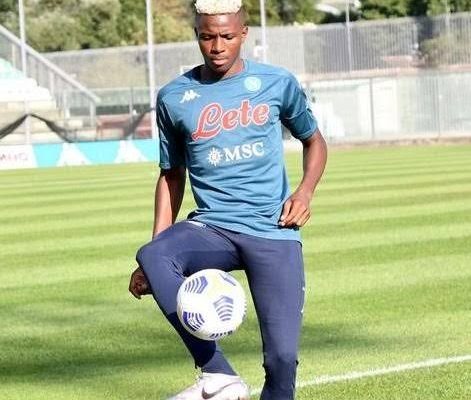 After an exceptional campaign with Ligue 1 side Lille last term, the Nigerian forward was the subject of interests across major clubs in Europe before he settled for Il Partenopei

But the respected tactician admitted that Leipzig could not afford the 22-year-old whose exploits in France meant he would cost more than 50 million euros.

Osimhen followed a 20-goal season in Belgium at Sporting Charleroi with an incredible 18 goals in all competitions in his maiden campaign at Lille, raising his profile beyond the roof.

Nearly every major club across the top leagues in Europe had the Nigerian forward on their shopping list after that feat.

But Osimhen eventually agreed to move to Italy, joining Napoli for a fee that made him the most expensive African player transfer in history.

Leipzig later signed Norway international Alexander Sörloth after missing out on their number one target Osimhen, who was way beyond the German side’s budget.

“Victor Osimhen was once in conversation, then he moved from Lille to Naples for over 60 million,” Nagelsmann said to Kicker via Fussballtransfers.

“There is a financial policy that we have and all strikers who guarantee a lot of goals cost upwards of 50 million euros. You have to be honest, that was just too much for us.”

Osimhen has managed only two Serie A goals for Gennaro Gattuso’s side but the former Wolfsburg star shone brightly as Napoli shocked champions Juventus at the Diego Maradona Stadium over the weekend.

CHECK IT OUT:  “May Allah protect us from jealousy and the evil eye” – Woman overjoyed at husband marrying second wife