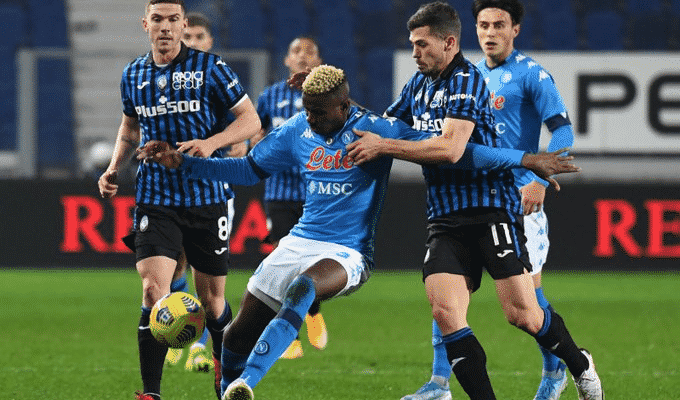 The Super Eagles striker has struggled since he returned to action, and it continued on Sunday as Napoli suffered a disappointing loss at Atalanta

Victor Osimhen was handed another start, but his struggles continued as Napoli lost 4-2 to Atalanta in the Serie A clash between the two sides at the Gewiss Stadium.

Osimhen is yet to justify the record-breaking fee Napoli paid to sign him from Lille last summer. The 22-year-old has just two goals in 10 league games and has struggled since returning from injury and coronavirus, which sidelined him for over three months.

The encounter against Atalanta was his third consecutive start since recovering from coronavirus, but he could do nothing to prevent Napoli from another loss.

The Nigerian international could only manage just one shot at goal for the whole duration of the game. It got worse for Osimhen as he was stretchered off with a suspected injury after colliding with an Atalanta defender.

The match itself only came alive in the second half. Following a goalless first half, Atalanta took the lead in the 52nd minute courtesy of a strike inside the box from Duvan Zapata.

However, the lead did not last long as Piotr Zielinski fired in a fine volley six minutes later. But goals Robin Gosens (64) and Luis Muriel (71) restored Atalanta’s lead.

Although an own goal from Gosens pulled one back for Napoli, Cristian Romero’s header in the 79th minute killed all hopes of a comeback.

The result means Napoli have now won just one of their last five games in all competitions, and are now three points off the fourth spot- although they have a game in hand.

CHECK IT OUT:  See Why Zimbabwe Has BANNED The Use Of U.S Dollars