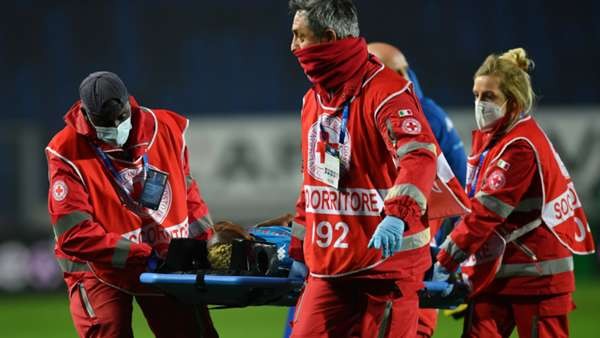 Napoli has confirmed that Victor Osimhen is in stable condition, but he will stay in Bergamo until tomorrow for further tests.

Osimhen was stretchered off in the closing minutes of Napoli’s loss to Atalanta following a head injury. The 22-year-old was rushed to the hospital where he regained consciousness.

A test was carried out on the Nigerian, but the result proved inconclusive, but he is set to undergo another test today.

A statement on Napoli’s website read: Victor Osimhen suffered an injury to his head in the final minutes of Napoli’s match at Atalanta. Following the game, he underwent medical tests but they did not yield a conclusive result.

The player will remain in Bergamo until tomorrow, under the observation of Raffaele Canonico, who leads the medical team at Napoli.

It’s been a frustrating season for Osimhen in his first year at Naples. The Super Eagles star joined Napoli from Lille for a club and African record of 81.3m euros.

However, he is yet to justify the huge fee with just two goals in 16 games across all competitions. Osimhen’s season has been blighted with injuries and illness.

The former Lille striker missed almost three months of action due to a shoulder injury he picked while representing Nigeria on international duty.

He missed more than two months of action before recovering. However, after recovering, the ex-Wolfsburg striker contracted Covid-19 following a trip to Nigeria where he celebrated his 22nd birthday.

CHECK IT OUT:  ”If You Are Still In Doubt That Buhari Ordered Aso Rock Clinic Not To Treat FCT Residents Then You Have To See This”- Omokri

Osimhen missed another two weeks of action due to coronavirus and only returned to the pitch at the end of last month.