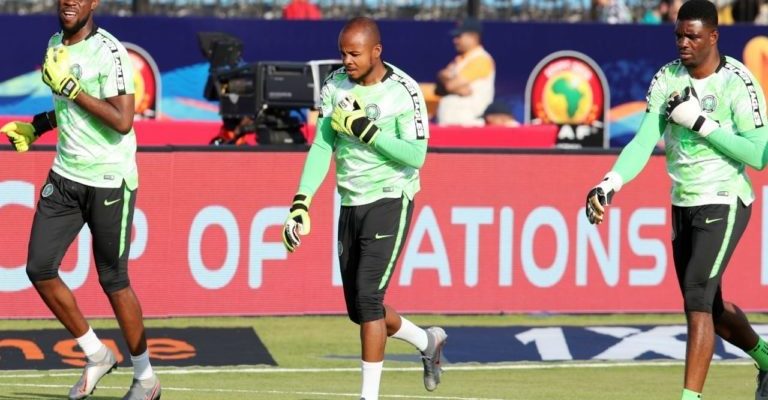 The 1980 African Cup of Nations winner took a swipe at the Super Eagles head coach for not going round to watch games in the domestic league to pick the best shot-stoppers in the country.

After a period of goalkeeping drought in the national team necessitated by the premature retirement of former Wolverhampton goalie Carl Ikeme, Rohr has finally decided on Maduka Okoye as the Super Eagles number goalkeeper.

The Sparta Rotterdam man has convinced Rohr he is Nigeria’s best despite his inconsistent performances for club and country.

The German-born 21-year-old conceded four goals against Ajax in an Eredivisie clash last weekend, the same amount of goals he shipped against Sierra Leone in November.

A situation that has left a puzzled Okalla wondering why the former Girondins Bordeaux manager is refusing to use home-based players to form the bedrock of the country’s national team.

“Has Coach Gernot Rohr ever gone round the league venues to watch our domestic league players know whether we have good goalkeepers or not?” Okala told the Guardian.

“He has not. Let’s not deceive ourselves.

“Rohr took rookies he did not know to go and learn how to keep at the 2018 World Cup in Russia.

“Where is that one done anywhere in the world? And we allow him to go on like that experimenting with goalkeepers at every tournament. Why would he continue like that?”

CHECK IT OUT:  How Governor’s Security Adviser Was Rescued After Being Kidnapped In Calabar (Photos)

A few goalkeepers have been dominating the domestic scene with excellent displays since the NPFL kicked off in December.

The highlight of which was John Noble’s heroics to lift Enyimba past Rivers United and into the group stages of the CAF Confederations Cup.

Okala is displeased that Rohr has not found one worthy for a Super Eagles call-up.

“We should be serious for once; to put it straight, the standard of the goalkeepers Rohr has been using is very low. We should not be fooling ourselves because how do you go into a competition still trying players?

“I think once there is a competition, you bring out your best rather than test-running a team,” he said.

Rohr, in the coming days, is expected to release a list of players ahead of Nigeria’s Afcon qualifying games against the Benin Republic and Lesotho in March.