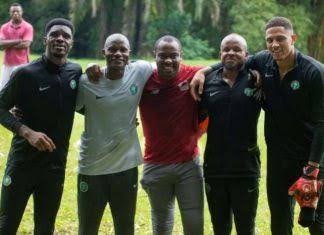 After making two subpar starts in this year’s CAF Champions League group stage, the Amakhosi recorded a well-deserved victory over their Angolan guests with considerable help from their Nigerian shot-stopper

Akpeyi had answers for every question the Angolan champions asked of him as he kept a clean sheet that powered Gavin Hunt’s men to their first win of the competition’s group stages.

The Nigerian goalkeeper was making his return to the first team after losing his place to South Africa’s Itumeleng Khune following a not-too-impressive performance in the Amhakhosi’s disappointing 2-1 defeat to arch-rival Orlando Pirates back in January.

In his absence, Kaizer Chiefs continued to struggle with the side recording no victory in five matches played in February, including two Champions League games against Horoya and Wydad Casablanca.

However, with Khune excused from club duties due to family issues, Akpeyi returned to the starting eleven to inspire Chiefs to a first win in nine games and a precious three points in the race to qualify for the knockout rounds of the continent’s premier competition.

It is also the perfect time for Akpeyi to send a clear message about his fitness and ability to Gernot Rohr.

The Super Eagles head coach prepares to invite players for the two crucial Afcon-qualifying encounters against the Benin Republic and Lesotho later this month.