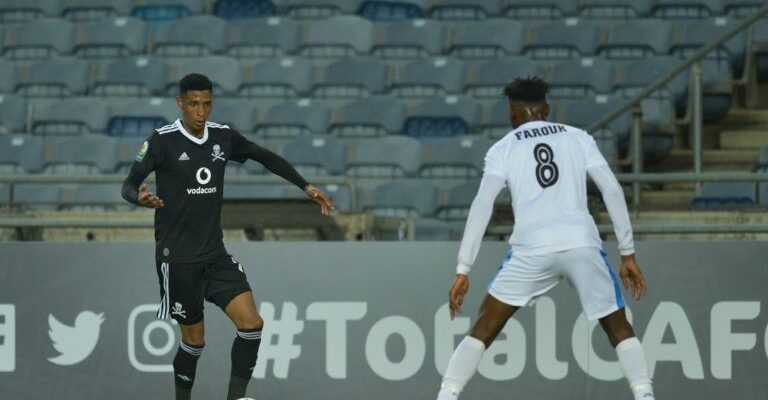 A late Mabasa header secured a fine 2-1 win over Enyimba Football Club and all three points at stake for Orlando Pirates at the Orlando Stadium in a matchday two CAF Confederations Cup clash played on Wednesday evening.

The Bucs dominated the early exchanges but poor finishing denied them the opening goal until the 27th minute when Hotto capitalised on a defensive mix-up to punish the shy visitors.

Mntambo gathered the rebound from an attempted clearance by Enyimba’s goalkeeper Noble and set up Hotto to find the back of the net with a fine back heel.

That opener, however, stung Fatai Osho’s men back to reality with the Nigerians showing more intent going forward.

Their attacking forays were rewarded late in the half when exciting forward Anayo Iwuala was brought down by goalkeeper Mpontshane in the box for an Enyimba penalty.

Up stepped captain Austin Oladapo, who made no mistake from the spot sending Mpontshane the wrong way to level proceedings moments before the referee brought an end to a frantic first half.

Orlando Pirates, boasting just a solitary point earned from their away trip to ES Setif on matchday one, were not out for a draw against the People’s Elephants.

And after a subdued display at the start of the second period, head coach Josef Zinnbauer made two tactical changes, replacing Kabelo Dlamini with Ben Motshwari, while sending on Tshegofatso Mabasa for Mntambo. Still, Enyimba continued to hold their own in Soweto.

A succession of corner kicks fell the way of the Buccaneers just past the hour mark with the visitors coming close to conceding again but the two-time African champions managed to weather the storm.

CHECK IT OUT:  AFCONQ: Uzoho In, Musa Out? Predicting Gernot Rohr’s 23-Man Squad For Benin, Lesotho

The Bucs, though, were relentless and in the 76th-minute the home side won a penalty and the chance to retake the lead after Mhango was adjudged to have been fouled in the box.

But Mabasa sent the resultant spot-kick over the bar as Enyimba heaved another sigh of relief.

And with ten minutes to go, new Super Eagles invitee Noble came up big for the NPFL side, producing a fantastic save to parry a stinging Dlamini shot around for a corner.

Enyimba, however, crumbled in the final minute of regulation time as Mabasa scored the South Africans’ winning goal, coming out of nowhere to head in on the near post from a corner and make amends for his missed penalty kick earlier.