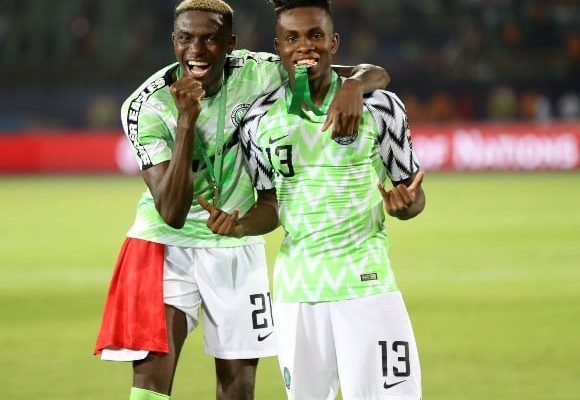 Several Super Eagles stars are famous for their unique hairstyles, but have you ever wondered who the man behind their fancy haircuts is?

The team is currently camped at the Eko Hotels and Suites ahead of their Africa Cup of Nations Qualifiers against the Benin Republic on Saturday and Lesotho three days later.

The Super Eagles take on the Squirrels in Port Novo before hosting Lesotho at the Teslim Balogun Stadium in Lagos on Tuesday.

Soccernet was at the team’s camp on Wednesday and Thursday to monitor the team’s activities, and while there, we got the chance to meet the hairstylist for most of the players.

The stylist who said his name was T-Jos told Soccernet he has been the hairstylist for many players in the team since 2018.

Meet the hair stylist for most of the Super Eagles players. #SuperEaglesBackInLagos pic.twitter.com/LYsSLVs7JL

According to him, some of the players include Oghenekaro Etebo, Victor Osimhen, Odion Ighalo, Samuel Chukwueze and many others.

He revealed most of the players prefer to have their cuts a day before the match, and it takes about 45-minutes for him to finish with each player.

When asked who was the first Super Eagles star he styled, the Abuja-based stylist said it was the team’s former left-back, Juwon Oshaniwa.

Although he’s always around every time the team has a match, T-Jos, as he is called, added that he is currently in discussion with the Nigeria Football Federation (NFF) to be the team’s official stylist.

CHECK IT OUT:
“Whatever Help, Support & Relief You Are Doing, Don’t Visit Ikorodu” – Lady Warns (Video)