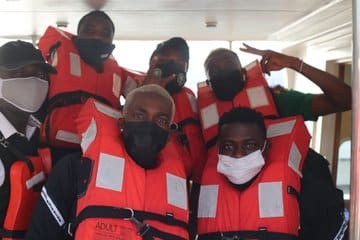 Super Eagles manager Gernot Rohr has confirmed that the team trained in darkness following their arrival at Port-Novo.

Nigeria take on their West African neighbours at the Charles de Gaulle Stadium in a 2021 Africa Cup of Nations qualifier on Saturday evening.

The team travelled by boat from Lagos on Friday morning and arrived at Cotonou the same day. They then made the trip to Port-Novo, where the game will take place.

However, it appears their preparations were affected as they had to train in the dark. Rohr revealed the Benin football association did not make provisions for floodlights, and they had to depend on the moon for light.

To add to this team Nigeria trainer in darkness for close to one hour at the stadium with Benin FA leaving them in darkness. Yes the flood lights were off and the team still were inside for atleast 30 mins after this video

But the German tactician said that the team was not affected by the situation and would go into Saturday’s match with a positive mindset.

“There was no light, but we handled it,” Rohr told the media.  We have the full moon. Tomorrow I feel good harmony in my team. Even if there are some problems, we are all the time having a positive mind.”

CHECK IT OUT:  NL PREDICT!! Who Will Score First In Arsenal vs Chelsea on Sunday, @ 3pm (PREDICT & Win Free Cash)

Nigeria needs just a point from the game to seal qualification for the Africa Cup of Nations scheduled to take place in Cameroon next year.