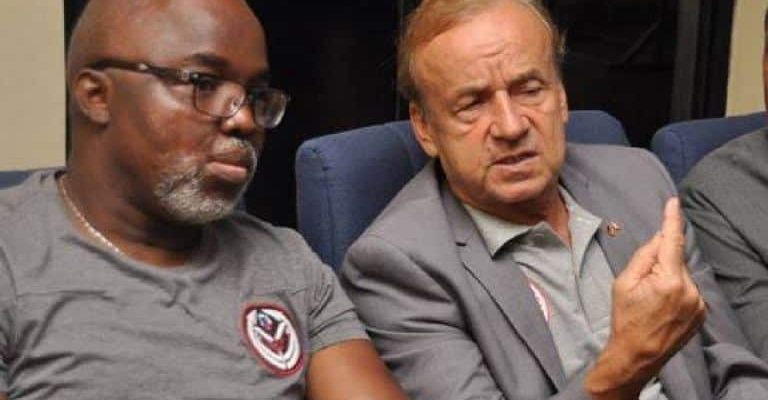 The German tactician has been one of the longest-serving head coaches of the national team, no small thanks to the unwavering backing of the country’s football administrator

The former Girondins Bordeaux manager says Pinnick gives him the freedom to chose and call any Nigerian player for Super Eagles duty.

When Pinnick was elected President of the NFF in 2014, his first choice of Super Eagles manager was ex-international Sunday Oliseh.

But after the former Juventus midfielder resigned from his appointment barely nine months into the job, Pinnick decided on Rohr and has stuck with the Franco-German through thick and thin.

And even when the calls for Rohr’s sack increased after the Super Eagles’ disappointing 4-4 draw against Sierra Leone last year, Pinnick defended the gaffer who was barely six months into his new two-year contract.

And Rohr, speaking during a dinner held to celebrate Pinnick’s recent election into FIFA’s Executive Council, was appreciative of the Nigerian football administrator’s support.

“I’m working with him now since five years, and there is complicity, there is confidence, trust, and also for me, it’s important that he lets me work in my independence,” told HIP TV.

“I can choose my players, I can do my list, and I also appreciate his loyalty.”

A few days ago, Rohr guided the Super Eagles to consecutive victories over the Benin Republic and Lesotho in the final Afcon qualifiers.

CHECK IT OUT:  JUST IN!! Neymar’s Camp Reply PSG Statement On Failure To Report For Pre-season

The German has now helped Nigeria qualify for two editions of the continental championship, leading the team to a third-place finish in Egypt in 2019.