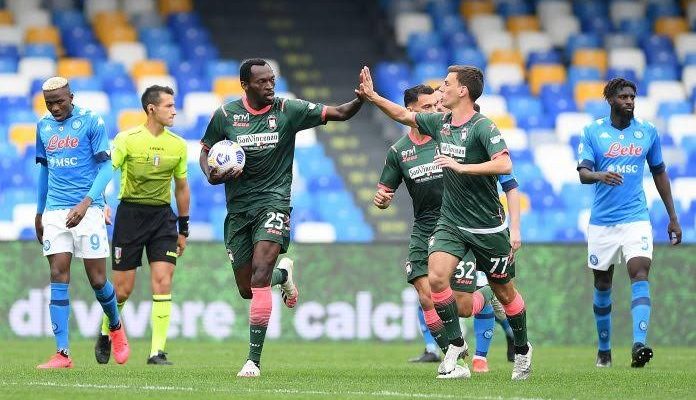 The Polish forward has established himself as the only contender for the European Golden Shoe this season, but the Nigerian international managed to outgun the Bayern Munich forward over the past month

Since the start of March, no player in Europe’s top five leagues has found the back of the net more times than Crotone’s brilliant forward, Simy Nwankwo.

The 28-year-old banged in a brace in Crotone’s 4-3 defeat at Napoli on Saturday to claim his 15th Serie A goal this term and rise to fifth on the top goalscorers chart.

8 – Best goalscorers in the top-5 European Leagues since the start of March 2021:

The Super Eagles striker has scored eight goals over the past 30 days to take his tally to 15 Serie A goals this campaign, more than any Nigerian before him in the Italian top-flight.

Compatriot Iheanacho fired blanks for the Foxes against Manchester City, and this couldn’t add to the five league goals he scored in March.

Benzema scored again in Madrid’s 2-0 triumph over Eibar on Saturday at the Santiago Bernabeu, his 18th La Liga goal of another impressive season.
But it is only the former Lyon ace’s sixth strike over the past month.

That is still one short of the seven that Lewandowski smashed home for Bayern Munich in March, with injury likely to keep him out of any Bundesliga clash this first weekend in April.

CHECK IT OUT:  What Happened To Prophet Who Said I Will Die In 1998 – Pastor Adeboye Reveals

A situation that leaves Nwankwo atop of the pile not only in Italy but also across Spain, Germany, England, and France.

Nwankwo’s magnificent March began when he got Crotone’s consolation goal in the 5-1 thrashing at Atalanta, having not scored in each of his five previous games.

The former Gil Vicente star then bagged a brace as Crotone secured a rare win in the 4-2 demolition of Torino, and another double followed in his side’s narrow 3-2 defeat at Lazio.

Bologna stole a comeback 3-2 win at Crotone with Simy netting the penalty that made it two-nil to the hosts just before the international break.

He showed no signs of slowing down after outsmarting Napoli’s defenders twice at the Diego Maradona Stadium.

Simy’s spectacular month also contributed to an increase in his market value with the striker, bought from Portimonense for less than one million euros, now worth at least four million euros, as per transfermarkt.

But the Nigerian’s exploits has not resulted in success for Crotone, with Serse Cosmi’s men rooted to the foot of the Serie A table and a massive nine points from safety.

Still 28, Simy’s remarkable displays would have convinced some top clubs of his quality, and he is not expected to return to Serie B with Crotone doomed for relegation.

A loyal employee by all accounts, Simy should know the time to quit Crotone is this summer, and it would be pleasant to watch him reach his full potential with better players around him at a different club.