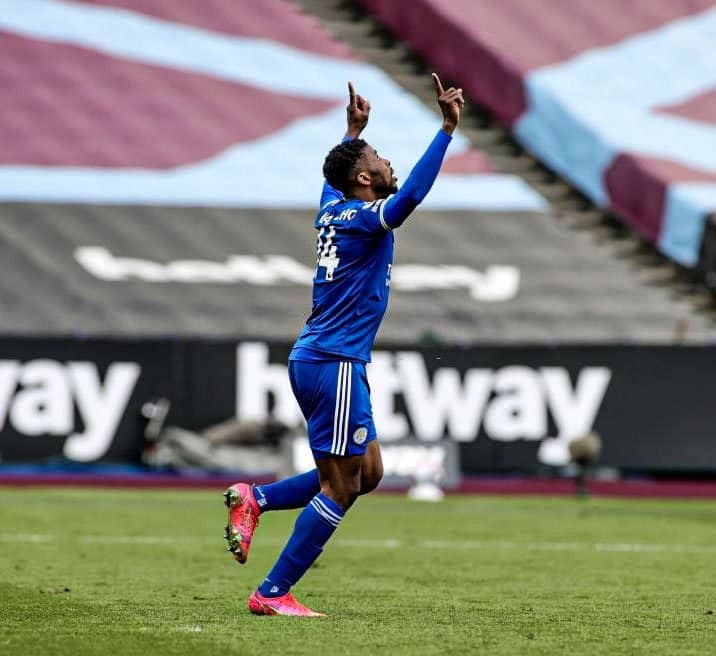 Kelechi Iheanacho leads the list of five other Nigerian stars on target for their respective clubs on Sunday.

Iheanacho scored twice in the Premier League clash against Leicester City and West Ham, but it was not enough to hand the Foxes the victory.

The Hammers took a two-goal lead inside the opening half before adding a third after the break. Iheanacho pulled one back for the Foxes in the 70th minute before adding a second in the first minute of added time- although Leicester could not complete the comeback.

Still, it was an impressive outing for the Nigerian international.  His latest brace takes his tally to 14 goals in all competitions this season, equalling his best return in a single campaign.

The 24-year-old scored 14 goals for Manchester City in the 2015/2016 season, and with six games to go in the Premier League plus two potential FA Cup matches, he is well on course to set a new personal best.

Meanwhile, in the Scottish Premiership, Joe Aribo scored his seventh league goal of the season as Rangers remain on course to finish the league unbeaten.

The Gers are already champions and are yet to lose in the league this season. They maintained the run as goals from Aribo and Ryan Kent gave them a 2-1 win over Hibernian, who pulled one back through Kevin Nisbet.

Aribo has now scored eight goals in all competitions for the Gers this season. In France, Terem Moffi scored his ninth goal of the season, but Lorient missed the chance to pull further away from the relegation places following a 4-1 loss to Lens.

CHECK IT OUT:  “Pull up if e sure for you” – Aloma DMW threatens Burna Boy over alleged beef with Davido (Video)

Gael Kakuta opened the scoring for Lens from the penalty spot in the 16th minute, but Moffi restored parity for Lorient in the 29th minute.

However, it was all Lens from that moment as goals from Corentin Jean, Arnaud Kalimuendo-Muinga, and Simon Banza sealed a comprehensive win for the home side.

Lorient remain out of the relegation zone, but are now just two points ahead of Nimes, who played a 1-1 draw against Brest.

While Moffi’s goal could not save Lorient from defeat, Osimhen’s strike helped Napoli to a 2-0 victory against Sampdoria in the Italian Serie A.

The 22-year-old fired in a superb strike three minutes from time after Bryan Ruiz had given the Neopolaitans a first-half lead.

Osimhen now has five goals in the Italian top division, and he’s starting to justify the money Napoli paid to sign him from Lille.

The former Wolfsburg striker was also on target against Crotone, while he also earned a penalty in the 2-1 loss to Juventus last Wednesday.

In Belgium, Paul Onuachu took his tally to 27 league goals after scoring the fourth goal in Genk’s 4-0 thrashing of St. Truiden. Onuachu’s strike is his fourth in his last four games for club and country.

Finally, in Denmark, Frank Onyeka opened the scoring but suffered an injury as Midtjylland remain on course to retain their Danish title following a 4-1 win at AGF Aarhus.

The 23-year-old gave Midtjylland the lead in the 17th minute but came off eight minutes later due to a suspected hamstring injury.

His withdrawal did not affect Brian Priske’s men, though, as goals from Alexander Scholz, Mikael Anderson and Mikael Anderson sealed a comprehensive win for the away side.

CHECK IT OUT:  Why Zamfara Govt Won’t Apologize Over Alleged Killing Of Villagers By NAF – Yari

Onyeka, who made his Super Eagles debut last year, has now scored three goals in all competitions for Midtjylland.