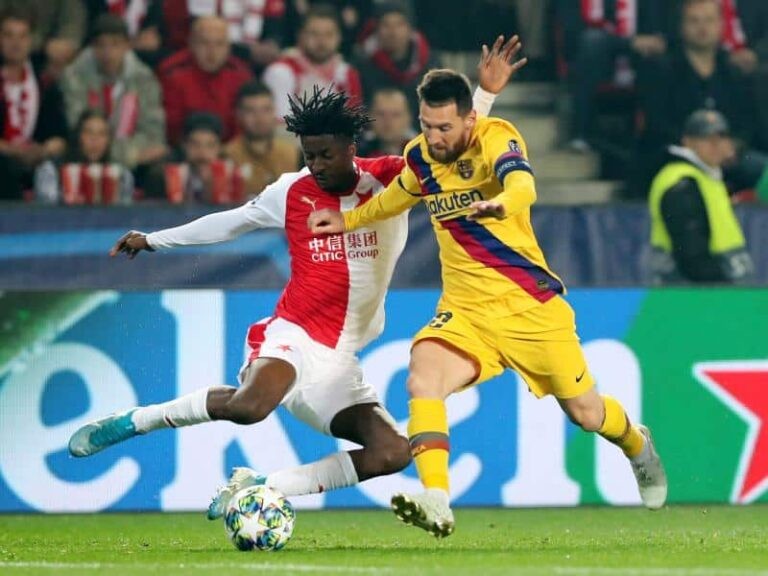 Arsenal’s last chance to salvage something out of what has been a miserable season is the Europa League, but Slavia Prague will hope to put the final nail in the Gunners coffin.

The Czech champions host Mikel Arteta’s men in the second leg of their Europa League quarterfinal clash at the Sinobo Stadium with the scores delicately poised, having played a 1-1 draw in the first leg at the Emirates.

Expected to lead the line for Slavia is Peter Olayinka. Olayinka is just 25-years-old, but he’s already a journeyman, having played for six different clubs in four European countries.

His journey to Slavia Prague has been nothing but rough. Olayinka started his European journey with Bylis Ballsh in Albania, and he had to go through tough conditions.

The one-cap Nigerian international revealed that he struggled to adapt to the weather conditions, and life was difficult financially.

After leaving Ballsh, Olayinka joined Yenicami AK in North Cyprus. He spent a year at the club before returning to Albania, where he was the subject of a transfer war between two clubs.

This handed him a suspension, although he eventually signed for KF Skënderbeu. After another two years in Albania, Olayinka’s career path moved to Belgium in 2016, where he signed for Gent before going out on loan to Dukla Prague.

Following his loan stint at Dukla, he returned to Gent, who once again sent him out on loan, but to another Belgian side Zulte Waregem.

On the expiration of his loan stint with Zulte, he signed for Slavia Prague in 2018, and it’s at the Czech club he made a name for himself.

Olayinka settled in quickly at the club, scoring six times and providing three assists in 22 league games as Slavia finished as champions.

He could not build on his decent performance the following season, but his biggest moment for Slavia was in that campaign.

Having finished as champions the previous season, Slavia navigated their way into the champions league group stages, where they were drawn against Inter, Barcelona and Borussia Dortmund.

The Nigerian international scored in the 1-1 draw against Inter while he also got to play against Barcelona and Lionel Messi at the Camp Nou.

And a season later, Olayinka and Slavia are set for another big night when they welcome Arsenal in the second leg of their Europa League quarterfinals.

Arsenal are still favourites to progress despite playing a 1-1 draw in the first leg. But Slavia have been in this position before and will be confident in their chances.

The Czech champions have already knocked out two British sides in the previous rounds. Leicester City were their first casualty, with Slavia beating the Foxes 2-0 at the King Power after playing a 0-0 draw in the first leg.

After knocking out Brendan Rodgers men, the Czech champions were drawn against Scottish champions Rangers in the round of 16. And once again, they prevailed, playing a 1-1 draw in the first leg before claiming a 2-1 victory at the Ibrox.

The Reds and Whites goalscoring burden will fall on the boots of Olayinka, and the 25-yea-old will be eager to kill off the little hope Mikel Arteta’s men have left.

CHECK IT OUT:  ‘We Have Proof That Atiku Is Not A Nigerian’ – APC

Olayinka has scored 11 times for Slavia this season, including three in the Europa League. The former Gent striker has also been brilliant in setting up his teammates with two assists to his name, and one big chance created.

And given Arsenal have conceded 11 times in the competition this season, Olayinka and his mates will go into the clash full of confidence.

It’s been quite a journey for Olayinka, but he has had many amazing moments with Slavia, and he is set to create another history on Thursday night.