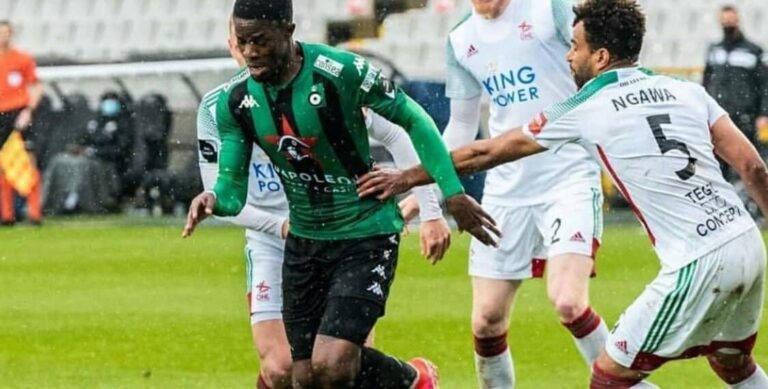 The former England youth international has been the saviour for the Green and Black in recent weeks, and he nearly claimed all the three points at stake for the visitors but for a dramatic late equaliser from the home side

On-loan Chelsea forward Ike Ugbo was on target yet again for Cercle Brugge but his side could only manage a 1-1 draw at KV Oostende on Sunday afternoon.

Ugbo capitalised on some slack defending from the hosts to open the scoring at the Diaz Arena for
Yves Vanderhaeghe’s men shortly after the first-half break.

With four goals in his last three matches, Ugbo is one of the most in form Nigeria-eligible stars in Europe. The Super Eagles hopeful now boasts 16 First Divison A goals in 32 matches for the less-fancied Belgian club.

Marko Kvasina’s strike deep into stoppage time however ensured Oostende share the spoils with Cercle Brugge on the day.

Ugbo has undoubtedly been one of the best forwards in Belgium in only his maiden campaign in the country. But the 22-year-old has made it clear that he has no intentions of extending his contract with Cercle Brugge when it expires in the summer.

CHECK IT OUT:  ‘Gareth Bale Is Not Bothered By Real Madrid Criticism’- Wales Manager Ryan Giggs Speaks Out