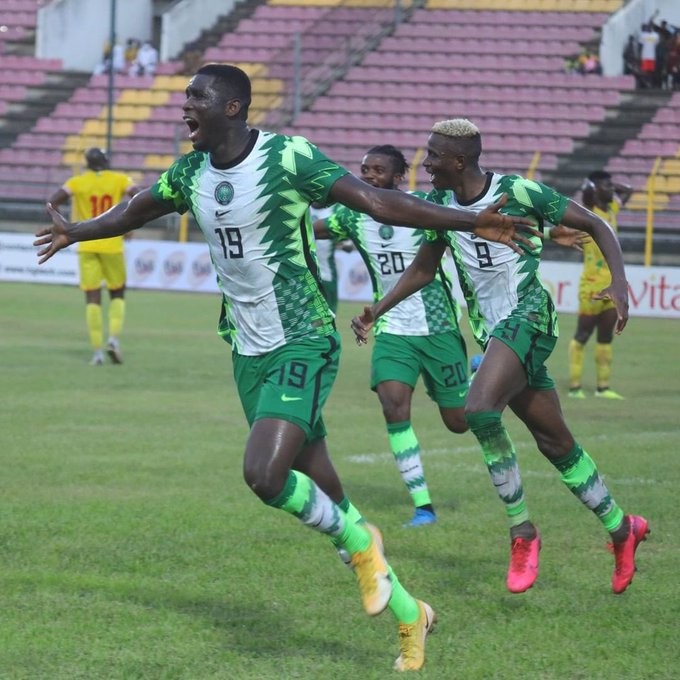 Many Nigerian stars in Europe have been unstoppable in recent weeks, and they continued in that impressive form on Saturday

Paul Onuachu was one of the many Nigerian players on targets for their respective clubs in different European leagues.

Onuachu scored twice on Saturday to take his tally to 29 league goals, but it was not enough to prevent Genk from losing against Royal Antwerp.

The 26-year-old opened the scoring in the 22nd minute before adding a second from the penalty spot in the 64th minute.

It looked like Genk were on course for a routine win until Didier Lamkel Ze pulled one back for Antwerp in the 67th minute.

Dieumerci Mbokani and Dylan Batubinsika then scored in the added minute to secure a dramatic win for Antwerp.

For Genk, they would be disappointed with how they lost it, but Onuachu can take consolation from the two strikes.

Meanwhile, in France, Terem Moffi also suffered a similar fate after scoring twice in Lorient’s loss to Olympique Marseille.  Moffi has now scored 11 times in 27 Ligue 1 games for the relegation-threatened side.

In Italy, Simy Nwankwo equalled Yakubu Aiyegbeni’s record as the Nigerian to score the most goals in a single campaign in Europe’s top five leagues this millennium after scoring again for Crotone.

The 28-year-old scored his 17th league goal in the Italian Serie A this campaign, but Crotone poor form continued as they suffered a 2-1 loss to Udinese.

In Sweden, Nigeria’s golden boy, Akinkunmi Amoo, scored his first-ever goal in the Swedish top-flight to help Hammarby to a 2-0 win over Mjallby.

CHECK IT OUT:  Buhari Issues Stern Warning To Shiite Members Protesting For Release Of El-Zakzaky

And finally, in Spain, Kelechi Nwakali was on the scoresheet for the second game running after scoring in Alcorcon’s 3-1 win at Lugo.