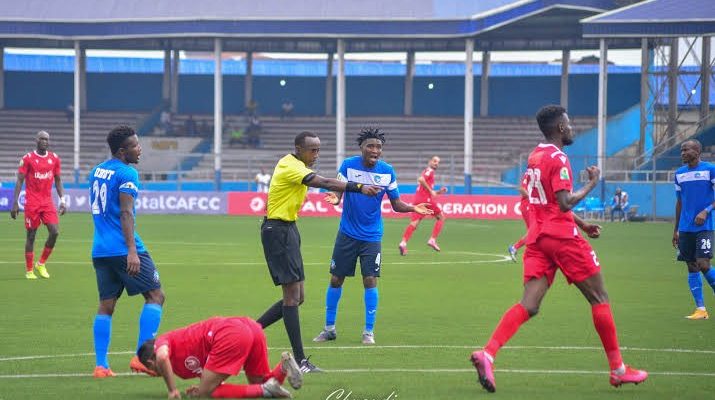 Ten-man Enyimba International FC succumbed to a narrow 1-0 defeat against Al-Ahli Benghazi at the Martyrs of February Stadium in Thursday’s CAF Confederations Cup Group A game.

After nearly missing the trip to Sudan due to administrative hiccups, Enyimba started brightly in Libya but failed to convert their early chances, the best of which fell to star forward Tosin Omoyele.

Al-Ahli punished the Nigerian representatives for those missed opportunities, with Muttasem El Taib notching the goal that made the difference in the encounter for the Butchers five minutes before the break.

The visitors then shot their chances of grabbing a vital equaliser in the foot when Timothy Danladi received his marching orders midway into the second half.

The setback is the Aba Elephants’ second consecutive defeat in the competition – following their defeat to ES Setif in Algeria last week – and their third away loss of the group campaign.

That pathetic away record is now threatening to derail Enyimba’s ambitions on the continent, with Fatai Osho’s men down to third in Group A.

Ahead of their final group match against Orlando Pirates next week, Enyimba sit three points behind the South Africans and boast one point fewer than Al Ahli Benghazi, a team that next faces ES Setif in a winner takes all clash.

The NPFL giants must now win their last group game against Orlando Pirates on April 28 to boost their chances of reaching the next stage of the continental competition.

CHECK IT OUT:  HONEST ANSWER! If Goodluck Jonathan Contest For Presidential Election In 2023, Will You Vote For Him?