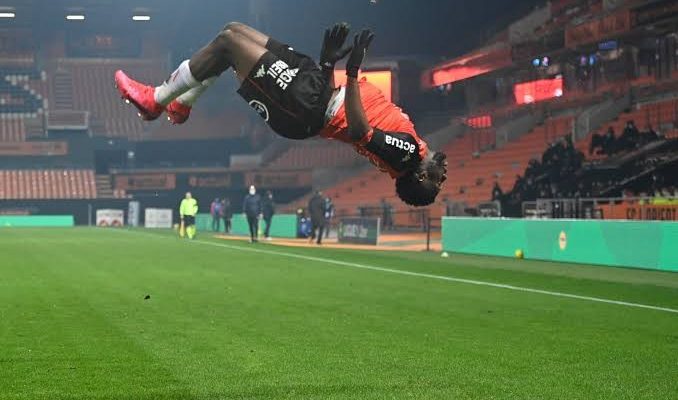 Ligue 1 has confirmed that exciting forward Terem Moffi is the youngest ever player to score at least ten goals for FC Lorient in the French top-flight.

Moffi has scored 11 goals in 27 league games for Les Merlus this season.  Lorient were only promoted from Ligue 2 as champions last summer, and Les Merlus quickly secured the services of Moffi for €8 million from Kortrijk ahead of the campaign among France’s elite clubs.

The 21-year-old has justified his big-money acquisition with eleven goals and three assists, which make up a staggering 43% of Lorient’s goal haul.

Even more significantly, at 21 years and ten months, Moffi’s double against Marseille makes him the most prolific youngster to ever put on the Les Merlus jersey.

And alongside Crotone’s Simy Nwankwo with 17 strikes, Moffi is the only other Nigerian to have scored 10 or more goals in Europe’s top-five leagues this season so far.

One attribute that has set the young forward apart is his ability to turn up in big games, with six of his eight goals in Ligue 1 coming against Monaco, PSG, and Marseille.

And Moffi would be one of his side’s key men when 17th-place Lorient host Bordeaux in a massive relegation six-pointer at the Stade du Moustoir with the visitors one place and four points above Christophe Pellisier’s men.

CHECK IT OUT:  OMG!! Man Stabs Another Man Dead With A Knife In Niger State (Graphic Photos)

Super Eagles playmaker Samuel Kalu is expected to return from injury for Les Girondins in the encounter slated for 2 pm on Sunday.