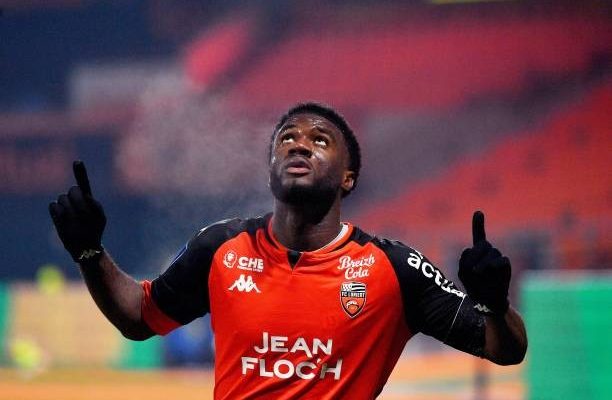 Nigerian stars have been brilliant for their respective clubs in Europe this season, and it did not change on Sunday as the campaign reaches its business end

Terem Moffi stole the show after his hat trick helped Lorient to a 4-1 win over Bordeaux in the French Ligue 1 on Sunday afternoon.

Moffi, who will be hoping to make his Super Eagles debut next month, scored Lorient’s last three goals after Yoane Wissa had given them the lead.

Meanwhile, it was a disappointing return for Samuel Kalu, who came on in the second half for Bordeaux. Les Girondins scored a consolation through Issouf Sissokho seven minutes from time.

In Belgium, Paul Onuachu was unable to add to his 31 goals this season, but he still played a crucial role as Genk beat Standard Liege to win the Belgian Cup.

Onuachu set up Theo Bongoda’s winner after Junya Ito had given Genk the lead. The former Midtjylland’s teammate Cyriel Dessers was an unused substitute.

In Spain, Samuel Chukwueze scored his third goal in four league games, but Villarreal suffered a 2-1 loss to Barcelona at the Estadio La Ceramica.

Chukwueze opened the scoring for Villarreal, but Antoine Griezmann’s brace turned the tie around for Ronald Koeman’s men.

Meanwhile, Simy Nwankwo scored a brace for Crotone on Saturday to become Nigeria’s all-time top scorer in the Italian Serie A.

Olanrewaju Kayode also scored his ninth goal in all competitions and third league goal of the season in Sivasspor’s 1-1 draw against Denizlispor.

CHECK IT OUT:  See How The Federal House Of Reps Are Moving To Protect Nigerians From Xenophobic Attacks In Ghana